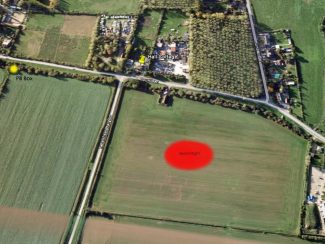 zoom
Site of Circle of Light, North Benfleet
From the collection of Peter Watts 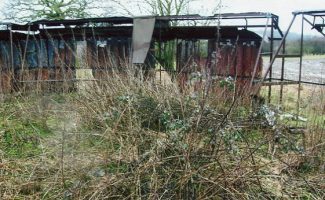 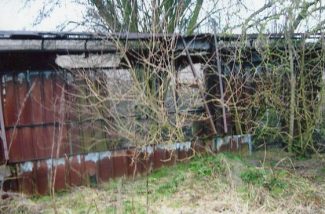 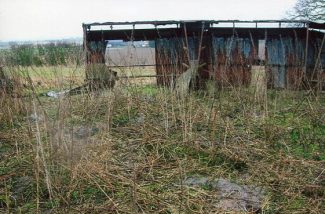 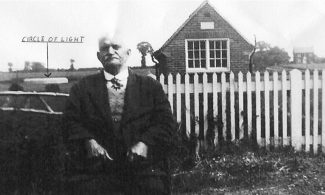 zoom
Mr Hoad of Pound Lane, North Benfleet with a Circle of Light in the background c. 1939-40
From the collection of John Wernham

I have read and listened with great interest to Mr Bertie Bardell’s stories in the ‘People’ section of the ’Benfleet Community Archive’  (Bertie Bardell’s Memories of Benfleet) and was particularly interested in his recorded account of what he describes as a form of searchlight being constructed in the South Benfleet area “Top of Birches Road” very early during WW2.  To this day Mr Bardell still wonders about the real purpose of the unusual looking ‘Searchlight’.  He describes it as “Being like a huge green circular greenhouse and an enormous flood light!” (Bertie is of the opinion that the huge floodlight was possibly a device to illuminate German parachutists descending at night).

A flood of responses

This subject is of particular interest to me, as on the 15th January 2002 and in the Essex Weekly News a Mr Charles Stock of 74 Longstomps Avenue put in a plea in the Chelmsford Weekly News to find out more about the mysterious WW2 “Circles of Light!”   His appeal resulted in a flood of responses with most people replying that they thought the “Circles of Light” were designed to “Dazzle enemy Pilots”, were “Death Ray” devices, “Searchlights to highlight German parachutists” etc.  It seems, to date, neither the Defence Department or anyone has been able to say precisely what these “Circles of Light” were.

It so happens that years later (2009) a Mr John Archer wrote a follow-up story to the Echo newspaper and told of his own experiences of what he also described as “Circle of Lights”.
Mr Archer sent the ‘Echo’ photos of a relic of one of the subject devices situated in the Kitts Hill, North Fambridge area showing what was left of one of them.  In response to a letter I wrote to Mr Archer at that time he said he had received seventy-five letters but not one of the respondents had any idea of the true function of these “Circles of Light”.

In the past three years I have twice been in contact with Mr Archer since he wrote to the ‘Echo’, (I live in Queensland, Australia) and we have shared correspondence about this most interesting subject.  We have both discovered that in spite of intensive enquiries neither of us has been able to discover the true reason for these devices.

My thoughts on the mystery

My own story and considered opinion is as follows:

During 1939 until 1944 I lived at 4 Hall Cottages at the intersection of Hall Road/Pound Lane North Benfleet.  I attended the North Benfleet Primary School.
In late 1939-40 on my way home from school I observed numerous lorries depositing  large amounts of corrugated iron into a field opposite our Pound Lane home where shortly afterwards the corrugated iron sheets were erected forming a large circle approximately 150 feet diameter and nine feet high.  The sides of the structure were vertical but the mirrored centre was concaved similar to the inside of a basin.  A few days later I saw more lorries delivering hundreds of boxes of extremely large ‘OSRAM’ light globes such as are used today in warehouses. A sentry was on duty the whole time and I was promptly told to “Clear off”.

At that time North Benfleet could best be described as a ‘Hamlet’ and with very few people living in close proximity.  Shortly afterwards I saw other such structures being built, two of them in an unmade road called ‘The Wick’ near Wickford.  Rumours as to what these structures represented were exactly the same as those cited by both Mr Charles Stock and John Archer.

Sufficient light to read a newspaper

I cannot give a precise date, but after the ‘Circle of Light’ was completed in the large paddock opposite our home it was switched on very late one night and bathed the whole district with sufficient light as to permit one to easily read a newspaper.  It remained on for about half an hour and was then switched off.  A short time afterwards the area was subjected to quite heavy bombing.

This happened on at least four times over a period of weeks until suddenly the lorries returned, dismantled all of the ‘Circles of Light’ in the area and took them away!

I have made exhaustive enquiries regarding these devices especially by use of the internet but can find no information other than that numerous forms of ‘Decoys’ were used during the early part of WW2.

My own conclusions are that these devices were simply another form of ‘Decoy’ whereby approaching enemy aircraft would, through normally low cloud cover, (and with poor navigational devices in use those days), perceive the region below them to be briefly illuminated, then, because of those below becoming aware of enemy aircraft overhead, the area was suddenly ‘Blacked out!’ causing the navigators to think they were over London itself.

They therefore dropped their bombs and returned home.

Undoubtedly, German intelligence would later realize that ‘Decoys’ were being used hence the subsequent removal of the ‘Circles of Light’.

A piece of history

The old chap in the monochrome photo was our neighbour Mr Hoad.  He lived in a tiny house, called ‘Dulce Doman’, next door to us in Pound Lane.  This is the only photo I know of that shows a ‘Circle of Light’ quite clearly in the background.  To me this photo is quite important, especially as I have yet to see an actual photo of one of the devices ‘in-situ’ and it therefore becomes a real piece of history.