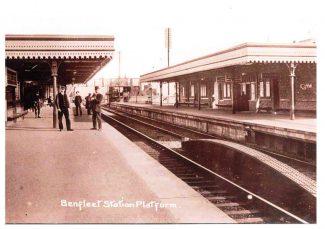 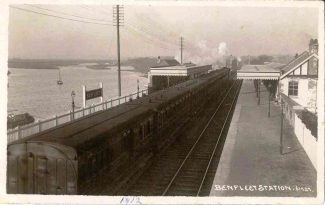 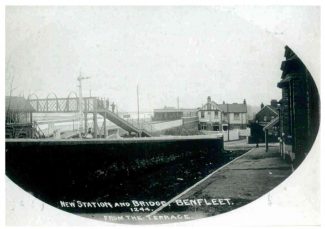 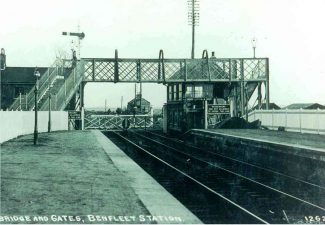 How the Railway came to Benfleet

The railway to Tilbury was originally built to carry Londoners to a river terminus from where they would be ferried to the pleasure gardens at Rosherville, near Gravesend.  It was also hoped to carry large-scale imports from Thames Haven.  In fact, neither of these happened to any large extent.

There was pressure, however, at the end of the 18th century, to service the new-found fashion for sea-bathing at Southend by replacing the existing steamer and coach services by a more speedy transport system.  A railway along the northern bank of the Thames was discussed – but it found no favour.   It was not until 1852 that an Act of Parliament received the Royal Assent to allow the line from Pitsea to be extended to Leigh and Southend.

Benfleet acquired its station to the east of the present site as this extension materialised in 1854/55.  It comprised up and down platforms with a signal box and basic accommodation for passengers.

The Opening of the New Station

However, in 1903 the station burnt down.   A new station had to be built and the site chosen was a few yards to the west towards London.   It was declared open in 1912.   The signal box was rebuilt alongside the level crossing and a footbridge spanned the line for those who needed get to the Canvey buses when the level crossing gates were closed to road traffic.   The one entrance/exit was to the High Street.

Overall the station has changed little since it was built.  The canopies particularly are virtually as the original although detailed inspection now reveals that some of the woodwork is decaying.  The signboards have been replaced by more modern equivalents and the gas lamps have disappeared.

Some pictures exist showing the first station and, up to the early 1990s, the line of the original platforms could still be seen among the brambles and undergrowth.