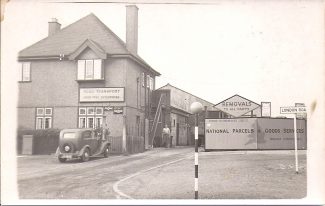 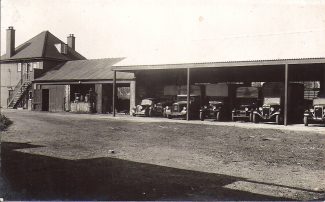 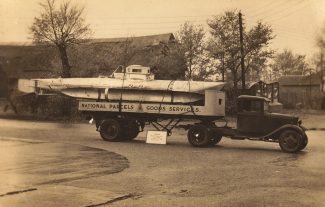 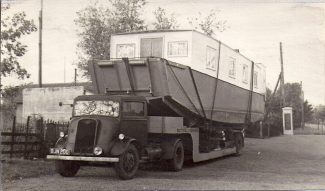 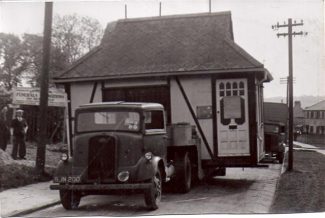 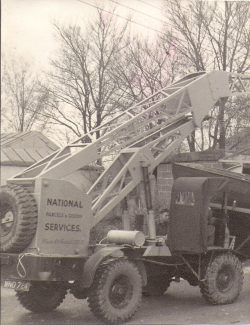 zoom
Picture 6 - One of the heavy lifting vehicles
F. Lazell 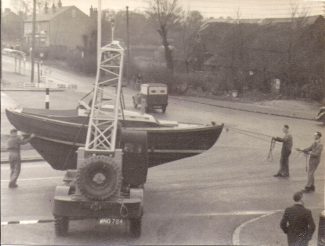 zoom
Picture 7 - A boat being lifted onto a lorry outside the yard
F. Lazell 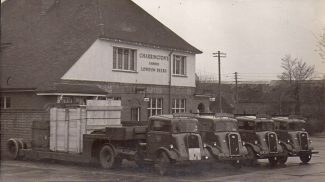 zoom
Picture 8 - A fleet of vehicles on the forecourt of the Tarpot Hotel
F. Lazell 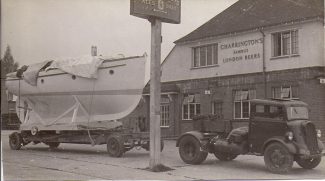 zoom
Picture 9 - A transporter carrying a boat on the forecourt of the Tarpot Hotel
F. Lazell

These photographs were kindly supplied by Frank Lazell who joined the haulage company based at Tarpots corner in 1960 as a van boy.

The company was originally called National Parcels & Goods Services and Picture 1 shows the entrance to their depot in the early 1930’s. If you look closely at this picture you can see on the far right of the picture a road sign showing London Road. The original entrance to the yard was from the main road, presumably where the present walk way from the rear of the shops is still in use today. Entering the site from Rushbottom Lane was introduced years later.

By 1937 the company was using the house at the main entrance as their Head Office and they had built a new loading bay in their yard for their fleet of vehicles as shown by Picture 2.

As the company expanded its haulage business it certainly undertook some unusual jobs as the following photograph shows.

Picture 3, taken at Tarpots corner, shows the company lorry carrying a German one man midget submarine which had been captured off the coast of France near Dunkirk during World War 2. Unfortunately we are unable to read the details on the sign by the lorry, so we do not know where it was collected from, where it was being taken or the date of the move. If anyone can give more information about this submarine, please let us know.

The other interesting detail we can see from this photograph, which has been taken from the High Road looking back towards South Benfleet, is the old farm building still standing near the corner – now Shaffers Arcade.

Picture 4 is taken from a similar spot, looking towards Sadlers Farm, and although it shows a boat on a trailer, note the unusual white telephone box on the right hand side.

Picture 5 has been labelled in the company’s record book as moving the Benfleet Citizens Advice Bureau. We do not have a date for this move, but the building was moved from a site near the current library to its new home in Jotmans Lane, where we believe it became the original shop on the site of the current general store. If you notice the photo is taken in Jotmans Lane looking back towards Cemetery Corner, as it shows the police houses on the corner on the right hand side. It also shows on the left of the picture an office which probably had some connection with the cemetery.

Pictures 6 and 7 show one of the company’s heavy lifting vehicles and it being used to load a small boat onto a lorry. In itself there is nothing remarkable in the actual operation, but as often happens the detail is in the background. The pictures are again taken outside the yard on London Road looking towards South Benfleet and show Tarpots Corner as it used to be in the 1940’s and 1950’s.

Picture 8, taken on the forecourt of the Tarpot Hotel as it was known as those days, shows a fleet of vehicles recorded as being supplied on contract to Messrs Crompton Parkinson of Chelmsford. Although we do not have a date for this picture, we can still see the old farm building on the right of the photo on the site of today’s Shaffers Arcade.

Naturally being near Canvey Island much of National Parcels work consisted of transporting boats around the country and Picture 9 gives an idea of the sort of work involved.