Life above the Shop 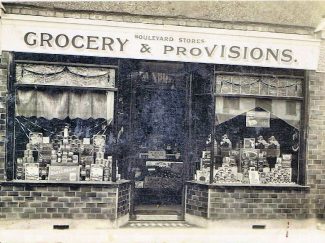 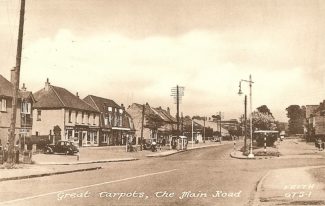 Arthur Norris, now living in Australia, has sent us early recollections of the life of his late wife Joan (nee Parker).  This part gives a fascinating account of her life when her parents ran a grocery business in the Parade of shops at Tarpots.  The family lived over the shop and, in spite of severe competition, even in those days, from larger stores, seemed to make a living.

Having earlier lived in rented rooms in Thundersley, where  her father sold insurance and then later worked for Croisettes, Joan’s family moved into the retail grocery business at Tarpots Corner.  Joan remembered –

“It was a small shop, with a living room and kitchen at the back, another living room, two bedrooms and a bathroom upstairs. We were situated in a row of other small shops, a butcher, chemist, and Croisettes, (formerly dealing in vending machines but by now selling bicycles) are those I can remember.  Also in the row was a hall (Tarpots Hall) used for public functions, complete with stage and some lighting effects. Dad became a member of the local amateur dramatic society and performed in several productions there.

“The years spent at the shop were happy times for me, although I was almost banned from being in there for a while because I would ask the lady customers if I could hold their handbag! Very embarrassing I am sure. One or two of the ‘regulars’ would smile and hand me the bag when they came in.

“Even at that young age I was interested in watching the large blocks of butter and cheese being cut into any weight required by the customer, using two large wooden spatulas, and wrapped in greaseproof paper. Dried fruit, sugar, rice, and all dried goods were delivered in bulk and then weighed into dark blue paper bags. Boxes of biscuits were displayed in fixed containers along the front of the counter, and had hinged glass lids. At the far end were the mixed broken biscuits, sold cheaper of course. (These were once again weighed by hand into paper bags, no tongs or disposable gloves!) At Christmas time orders would be taken for homemade fruit mince. I still have a picture of Mum mixing this in a huge enamel bath. Do not know where they acquired the jars. Certainly would not be permitted now with our health and safety regulations.

“We had a BSA motorcycle with sidecar attached, this was used for collecting goods from the wholesaler and delivering orders to customers. It was also used occasionally for private journeys.

“Between the shop and living rooms was a small hallway with the stairway to the upper rooms. The small cupboard under the stairs was home for the two pet cats, I say they were pets but in all probability their function was to keep down the mouse population. We also had so called pet pigeons in the back garden but we soon got over-run with them. They became messy and smelly too, so it was decided to have pigeon pie for breakfast one Christmas instead of the traditional (for the Parker family) rabbit pie. As I recall no one could face it!

“The garden was long, narrow and neglected, possibly because in the limited spare time that Dad had he preferred to play football, which also meant training. I rarely played out there, and in fact was banned from going down the far end as we had a cesspool, which was known to overflow when it needed emptying. So my playground was largely in front of the shops with their concrete forecourts, a great place to ride up and down on my scooter, of which I was very proud.

“I don’t recall having that many toys, which was quite usual back then, but always seemed to have a good selection of colouring books and crayons, a favourite occupation of mine, also a large teddy bear, and a black doll with the most gorgeous face. I left her sleeping in the sun on one occasion and her eyes stuck closed, resulting in a visit to The Doll’s Hospital! Lack of toys seemed unimportant, we made our own games using any items to hand, plus a lot of imagination. Here again I was very fortunate in having two doting Aunts living just a few miles away in Benfleet, Dad’s sisters, Dorothy, whom I was named after, and who was known as Dorrie, and Edna, the younger of the two.

At some time during 1932 I was told that we were moving from the shop to a place called Shenfield.  The reason for the move was that the South East Cooperative Society opened a store right opposite ours at Tarpots Corner, pricing us right out of business. Must have been quite devastating for my parents