We need your help 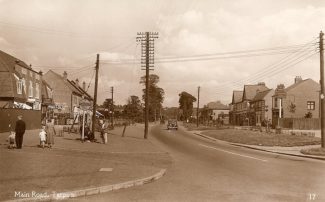 zoom
Tarpots Hall can be seen on the left
R.F. Postcards 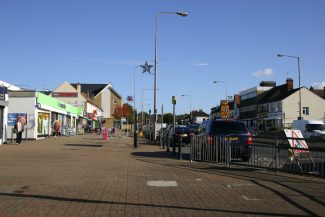 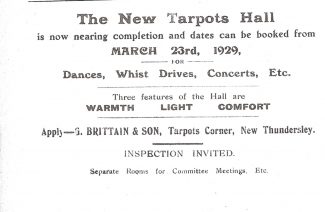 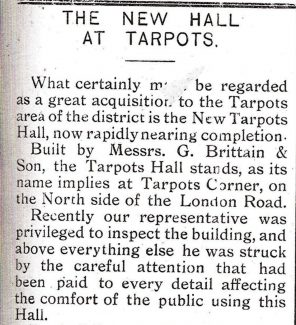 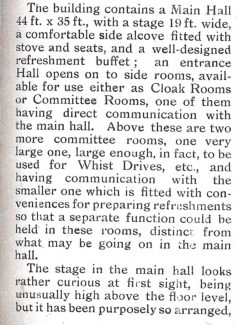 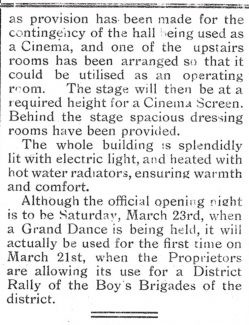 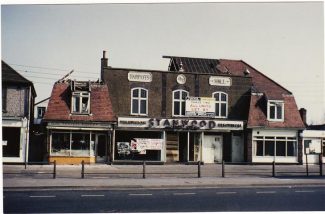 Can you remember the Tarpots Hall which used to be where the Co-op supermarket now stands?

Have you any information of the various functions held there or maybe a photograph taken of a wedding or party held there?

The following announcement from the “Benfleet Weekly Gazette” of 22nd February 1929 certainly gives a feel of a grand facility.  It was officially opened on 23rd March 1929 and was hopefully well used at the time.

This article, taken from the same newspaper, reads as follows

“What certainly must be regarded a great acquisition to the Tarpots area of the district is the New Tarpots Hall, now rapidly nearing completion.  Built by Messrs. G. Brittain & Son, the Tarpots Hall stands, as its name implies, at Tarpots Corner, on the North side of the London Road .  Recently our representative was privileged to inspect the building, and above everything else he was struck by the careful attention that had been paid to every detail affecting the comfort of the public using this hall.

“The building contains a Main Hall 44ft. x 35ft., with a stage 19ft. wide, a comfortable side alcove fitted with stove and seats, and a well-designed refreshment buffet; an entrance Hall opens on to side rooms, available for use either as Cloak Rooms or Committee Rooms, one of them having direct communication with the main hall.  Above these are two more committee rooms, one very large one, large enough, in fact, to be used for Whist Drives, etc., and having communication with the smaller one which is fitted with conveniences for preparing refreshments so that a separate function could be held in these rooms, distinct from what may be going on in the main hall.

“The stage in the main hall looks rather curious at first sight, being unusually high above the floor level, but it has been purposely so arranged, as provision has been made for the contingency of the hall being used as a Cinema, and one of the upstairs rooms has been arranged so that it could be utilised as an operating room.   The stage will then be at a required height for a Cinema Screen.  Behind the stage spacious dressing rooms have been provided.

“The whole building is splendidly lit with electric light, and heated with hot water radiators, ensuring warmth and comfort.

“Although the official opening night is to be Saturday, March 23rd, when a Grand Dance is being held, it will actually be used for the first time on March 21st, when the Proprietors are allowing its use for a District Rally of the Boy’s Brigades of the district.”

Sadly the hall was eventually demolished and replaced with shops.