Working in the Tarpots Area 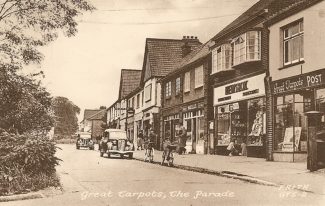 zoom
The parade of shops at Tarpots
date unknown 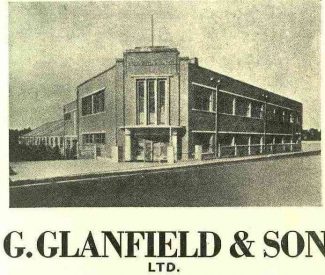 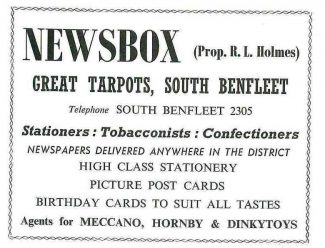 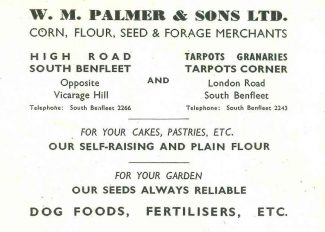 I served some of my early working life in Tarpots as a delivery boy, first as a paper boy working from the Newsbox next to the Post Office.  Sundays were the worst day as many people would take just a Sunday paper though I had one man who lived somewhere over the fields from Manor Road and he would give a half-crown to take him a paper on Sundays, the only paper he took, as I recall, thank goodness because it seemed like miles across just fields, not even a path.

Then after leaving school a job at Newburys in Hamlet Court Road as a dogsbody or ‘bakers assistant’ as I was called, doing the washing up and what-have-you for Mr Camper the head baker and Alf the second.  Both men were real masters of their craft and the patisserie they produced was renowned throughout the area and much sought after.  After our finish on our half-day Saturday we were allowed a box and to select whatever we liked as long as it fitted the box; my Mother was particularly partial to ‘Jap’ biscuits as they were called so most of the selection would be those, which I carefully carried home on the bus.

……. a whole two shillings a week but I would be expected to work harder because of the increase.

All-in-all it was a forty-eight hour week for two pounds eight shillings, though during my time there Mr Don one of the Newbury brothers took me aside and told me the Bakery Council had upped my wages and they had increased by a half pence an hour, a whole two shillings a week but I would be expected to work harder because of the increase.

There was also a restaurant which was catered for by an older man “The Chef” and he and I got on like a house-on-fire once he learned I was waiting to serve an apprenticeship at the  Abercorn Rooms of the Great Eastern Hotel in London as it was there that he had worked for many years.  He told stories of live turtles being delivered to be turned into soup and the gruesome demise of poor said turtles being rather upsetting, how he had started as a boy and his job was to keep the coal fired ranges stoked and cleaned each day. He spoke of the banquets that were cooked and served there and he had a selection of the menus of the time, all very extensive and probably expensive too.

I was standing at the sink one day idly swirling the water about with one hand when I got a smack around the ears that knocked me to the ground and I lay there and heard Mr Camper saying we pay for the use of both hands boy. I think that may have influenced my leaving the place, that and “The Chef” retiring on a Saturday and him sitting and talking to me and saying I don’t know what I’m going to do Boy. He was at that time 75 years old and he must have worked for at least 60 or more years, we shook hands and I wished him well and said make sure you come and see us but he never did because he died the following Sunday night; we all thought it was because he had no work to go to and it was too bewildering for him.

After leaving Newburys I worked as Butcher’s boy for Bert Christmas, his shop was next to the Newsbox and my main task was riding the bike with the deliveries on it with Saturday being the big day.  It was shades of Granville in ‘Open all Hours’ with the amount of meat in the front basket, making deliveries as far as Benfleet itself and then the long drag back; unless you have ridden a trades bike you won’t know what a long drag it is from Cemetery Corner to the top of the Hill at Croft Road.  Quite often a fellow delivery man who worked for a Benfleet butcher and drove a Ford van as their delivery vehicle would let me hang on to the window sill, drivers side, and he would drive up the road sometimes at forty miles an hour with me on the side steering the bike one handed and we would shout to one another about things of the day.

Bert had a stab at teaching me to drive but I never got to the ‘take a test’ stage because he and his Family moved to Auckland New Zealand.  Some years later I was in the Merchant Navy and walking up Queen’s Road in Auckland and bumped into David, who was somewhat surprised when I said “Hello David, how are you?”, he did look a bit flabbergasted and managed to say what are you doing here.

My memory is a bit hazy as to why I left Bert; probably because of their decision to go to New Zealand but from there I went on to work for Essebridge at the Weir in Rayleigh for around six weeks as I was waiting for my National Service call up.  I decided to volunteer because if you did three years you got £3-00 a week as opposed to £1-10s-0d as National Service and anything that got you into trouble counted as time served as a volunteer but had to be done again if you were not.

I failed my medical as a volunteer but six weeks later passed as National Service, it was at that point the bolshie bit took over and I asked why I could fail one medical and pass a second six weeks later which got me thrown out again, with a great deal of ill grace and a few choice words telling me to go away.

Eleven years in the Merchant Navy

I then went to Billy Tucker in Pitsea as shopman cutter quite a step up from the delivery boy and I worked with Owen Jones whose Father owned the butchers shop in Tarpots next to the service station/garage on the opposite side of the road to where Bert Christmas had his shop.

Owen had done some time at sea and probably inspired by him I joined the Merchant Navy for the next eleven years, which was how I met David Christmas in Auckland and the two Palmer girls who lived nearer Tarpots in a bungalow on the left coming up the hill, their Father Horace Palmer owned and ran the feed store just before the Tarpots itself but on the left going toward the London Road.

Does anyone remember the Mendozza’s Hairdressing Saloon between  Mr Palmer’s and Smith’s the ironmongers/builders merchants; I can still remember Ivy, who worked in the shop, to this day.

At one time there was a large black barn right on the corner, later it was pulled down and the land was then used to build the garage between the corner and Mac’s Café, the Café being the haunt of the local boys and shared in an uneasy truce with the Pound Lane boys and quite often lads from Laindon.

Chasing an empty sack and the case of the disappearing flagpole

One night before dark a group of us was standing on the Pub forecourt  being addressed by the Police, in a casual way, regarding the theft of the flagpole at the new Police Station in Benfleet when a V8 Ford Pilot drew up on the forecourt and a young lad locally known as Spider got out.  He glanced over at the Police, reached into the car and grabbed a sack from inside which interested the Police who went to speak to Spider who promptly ran across the road and down Rushbottom Lane hotly pursued by the two Policemen.

Spider appeared again running out of Lambeth Road past the front of Glanfields factory and running back to the Pub still pursued by the two constables who grabbed Spider now laying over the top of his car and saying “alright I give up”; when questioned as to what was in the sack he replied, “nothing, honest”.  This was not accepted by them and one of them grabbed the sack and after a little struggle it was taken off Spider and opened, to discover it was indeed empty. Spider on seeing the Police when he drew up had done it out sheer devilment and caused much amusement to the now sniggering onlookers.

I was actually away at sea when the theft of the flagpole took place but was told of the event on getting back home.  It was some years, I believe, before the pole was discovered in its hiding place on the roof where it had been hauled up and left there by a group of the tearaways, an event that caused quite some merriment to those in the know and no doubt irritation to the Police and perhaps to one Inspector who was not greatly like by many of the youths of the time.