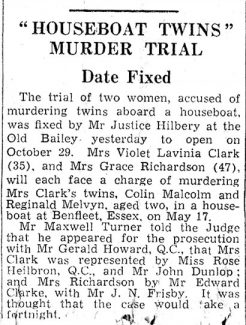 zoom
Manchester Guardian October 18th 1956
Discovered by Eddy Dodwell who says "The article was found in an old drawer at a friends house."

In 1956 a tragic houseboat fire occurred in East Creek, Benfleet. In it twin three year old boys – Colin and Reginald Wright – died when the houseboat they lived on caught fire.

The death of children is always a tragedy, but this one was more so as their mother – Vici Wright – was charged with their murder. The case went to the Old Bailey, but her defense barrister – Rose Heilbron – managed to convince the jury that she was not guilty of murder.

Instead the jury brought back a verdict of manslaughter as Vici Wright had made no attempt to rescue the twins from the fire. She was given two separate sentences of three years each to run concurrently. With good behaviour she was released from jail after eighteen months.

This story is covered on both The Canvey Community Archive and four separate stories in the Echo. Between them they give a lot of details about the events.

The Canvey Community Archive article was written by Robert Hallman and includes a number of comments from people who knew the people or events.

The first of the Echo articles was on Friday 11th July 2008 and was titled “Secrets still clinging to the mud” dealing with the boy’s father Reginald Wright and background history of the story.

The second article was published on Thursday 5th June 2008 and titled “What happened next?” deals with the exhumation of Reginald Wright’s body.

The third article was published on Thursday 18th September 2008 and titled “Mum’s hell after houseboat murders” giving a good overview of the history as told by the son of the other person charged with the murder, who was found innocent.

The fourth article was published on Thursday 18th October 2012 and titled “Secrets still clinging to the mud” is another overview of the history trying to find where Vicci Wright is.

Another source of information is a video on the www.itnsource.com site, which shows the police searching for clues.