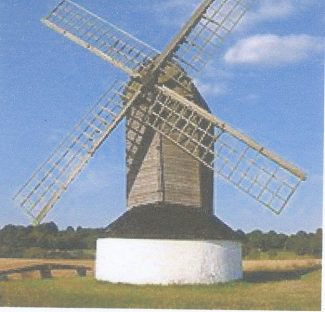 zoom
Pitstone Windmill - an example of a 17th century postmill 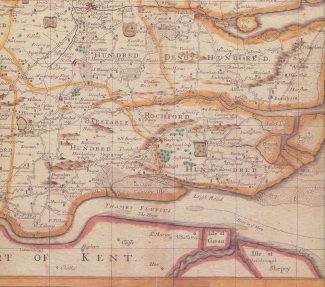 zoom
From Ogilby and Morgan's map of Essex 1678 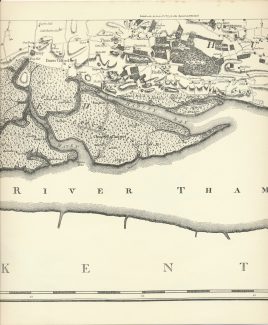 zoom
From Chapman and Andre's map of Essex 1777 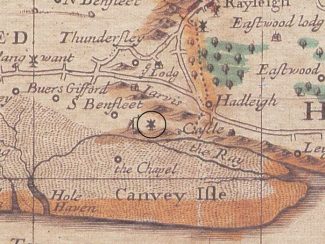 Ogilby and Morgan’s map of 1678 shows that there was a windmill at Benfleet, which accounts for the road name “Mill Hill” (linking St Mary’s Road with Eastleigh).  However I am not aware of any physical evidence that would confirm where it was sited. The information that we do have, places the mill 3 furlongs (= 660 yards) bearing East South East from the church and this certainly takes it to the vicinity of Mill Hill.

The size of the map symbol is very small, but if you click on the image, it will become clearer . It can be found to the right  of and below “South Benfleet” and to it’s left a symbol representing a beacon.

Evidence of windmills in England date from the twelth century and early illustrations show simple wooden postmills. Tower and smock mills were to come later. Even postmills boasted around 8 variations and these are so named because of the large upright post on which the mill’s main structure (“Body” or “Buck”)  is balanced. By mounting the body this way, it is able to rotate. An example of a surviving postmill can be found at Mountnessing.

We do not know what happened to this Benfleet windmill, but it has gone from maps of a later date such as Chapman and Andre’s in 1777, so somewhere in those 99 years it ceased to function and was never replaced. These are things we know, but what we don’t know is why it shut down.  If it had happened in the 19th century there would have been numerous newspaper accounts for us to draw on.

I think the most likely explanation is that it was destroyed in the great storm of 1703, a storm that has not been surpassed in the recorded history of this country.  8000 lives were lost …many at sea.  The Royal Navy suffering particularly heavy losses. Daniel Defoe could not believe what his barometer was telling him. Four hundred windmills  were destroyed . The designer of the Eddystone lighthouse was so confident  of his structure that he insisted on being taken out to it…a serious and ultimately fatal error of judgement!

Those 8000 lives were from a total population of 5 million which would equate proportionately  with a figure of 100,000 from today’s population.

Daniel Defoe on the Great Tempest of November 26, 1703  wrote :  No pen could describe it, nor tongue express it, nor thought conceive it unless by one on the extremity of it