A 'Castle' in Benfleet 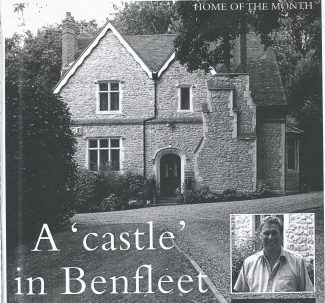 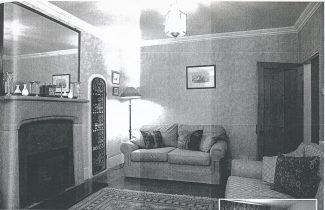 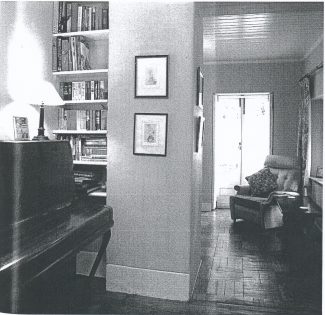 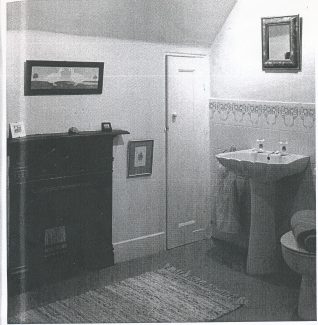 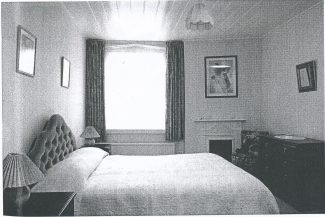 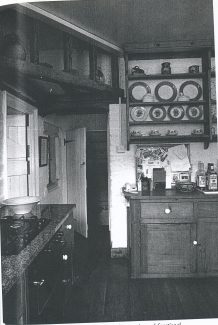 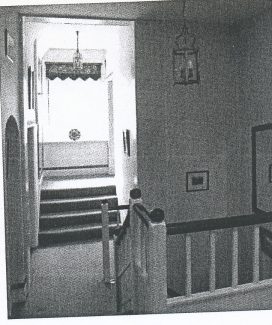 Built in 1847….this house was the vicarage belonging to St Mary’s Church until the 1960s, when it passed into private hands:-

Gothic in style, yet with every modern convenience, Charles Latham’s “castle” home in South Benfleet was designed as a vicarage.

Properties come in all shapes, sizes and styles, but few are quite as extraordinary as Charles Latham’s home. The old vicarage in South Benfleet is something quite special. Its gothic archways, ecclesiastical-inspired windows, and numerous square tudor brick chimneys combine to give the house a look straight out of a storybook. And that’s before you even begin to contemplate the creamy bricks, buttresses and styling that give it the look of a mini fortress.

“It’s a wonderful house to live in” says Charles ” It was designed by an architect called George Devy in a sort of gothic style. This was one of his first works, and he went on to design a lot more similar vicarages. He became well known for them. His plans are still up in the archives of the Royal Institute of British Architects.

Driving up the shingle drive, past trees that have clearly stood the test of time (not to mention a few gales from the Langdon Hills)and now have a preservation order on them, to the front door of the Old Vicarage and you are immediately struck by the appearance of the house. The creamy chunks of stone used in its construction are pristine. It is hard to put your finger on the right word to describe it  – is it pretty? Elegant? Its rather like a castle. It’s certainly distinctive.

“It’s gothic” says Charles. “The stones used to build the house are believed to have come from Hadleigh Castle. They were refurbished in the 1980s and coated with a silicone to protect them for the next 40 years or so. It’s that that gives them their bright colour”.

Built in 1847, the Grade 2 listed house was the vicarage belonging to St Mary’s church for a great many years until the 1960s, when it was purchased by the Carslake family. Charles bought it in 1988 and set about making the interior as eye-catching as the exterior.

The  entrance hall gives you the first taste of the elegance of Charles’s home. Primrose in colour, the walls have a blue and yellow frieze, and original oak flooring that has been stained to bring out and enhance the natural pattern of the wood.

Past the heavy wooden front door, which still has its locks,handles and hinges that are believed to be original, and up a couple of steps, the hall is bright and airy with a turning staircase to the galleried first floor. To the right is the lounge and study; to the left the dining hall and farmhouse kitchen. Straight ahead you can,if brave descend some narrow steps into a cellar – it’s large and perfect for storing some 1,200 bottles of wine!

Because the entrance hall is surrouded by rooms and, in effect, has no natural light of its own on the ground floor, with only light from one window on the galleried landing above, Charles wanted a colour that made it bright as well as welcoming.  Yellow was the natural choice, with the ceiling and painted surfaces in white.  It provided a perfect backdrop to his collection of dark wood furniture, as well as the paintings and prints that adorn the walls.

The main sitting-room, off to the right. is a cosy room. Fresh creamy walls lend support to the stained dark wood floors creamy gold patterned curtains and big comfy sofas.  It is a room for being utterly relaxed – as indeed one of the previous occupants clearly was. The focal point of the room is a big stone fireplace and if you rub your hands down the co ??? surface of the right-hand surface you feel a small area that is smooth where it has worn away.  Charles explains: “One of the vicars who lived here for a long time had his favourite chair just to the right of the fireplace, and he would rest his feet here on the fireplace to keep his legs warm  His feet would always be in the same place,  and that is how the stone got worn away.”`

Every  house has its quirks and without doubt The Old Vicarage wouldn’t be the same without little reminders of the vicars who were one-time residents.

Not a vicar but a busy solicitor with Southend and Chelmsford based Tolhurst Fisher, Charles jokes that he often burns the midnight oil poring over notes and documents for clients, which means that he can often be found in his study, just next door to the sitting room.
A relaxing room, where you can indeed imagine that midnight oil flickering against the soft pink of the walls – well, maybe the beam of an electric light these days – as the room is subtle in its decor.  The pink complemented with dark furniture , including a desk, and stained floorboards. There is a pink and green sofa in an area reminiscent of a snug, pink curtains and chairs upholstered in a jade velvety fabric.

This room is also clearly a place to retire to, as a large piano set against one wall and a bookcase of lively reading material suggests. It is easy to imagine Charles, or any one of the house’s previous occupants, strolling from this room out through its french doors onto the beautiful red brick herringbone pattern patio at the rear to sit and contemplate.

Charles, when not working, or indeed contemplating, likes to entertain. Just across the hall in the “west wing”  is the dining room, a pretty room in soft yellows and whites with dark stained floorboards and wood furniture. The curtains pick up the yellow colour combined with maroon, navy and cream ivy pattern, with tiebacks and a maroon roller blind.

A little red brick open fireplace attracts your eye as you enter the room, which Charles says provides a focal point, when lit, at dinner parties.

The farmhouse-style kitchen next door is where the hive of activity takes place in preparation for just such parties. It is a good size with lots of character. The ecclesiastical design of the house is, again, very prominent in the kitchen through the shape of its two windows, plus the room has aged beams that provide a feature, country-style flooring and a brick wall that has been painted in white as a backdrop to the wooden units.

“These units were fitted to match the stripped pine dresser, which I think is original” explains Charles. ” I had them made  to match as near as possible”. He added little round white china handles to each door and draw front to give a uniform look, and to blend with one of the kitchen’s most eye-catching features, its butler sink.

“There is a really old butler sink in the scullery next door, and there may have been one in here too, but when we moved here it was just a very ordinary one. I had it replaced because I wanted to recreate how the kitchen might have looked years ago”.

Today, the kitchen and the adjacent scullery, where the stock brick flooring has clearly seen many, many years of wear, are every inch a modern working part of the house, blending the new with the old.

The old vicarage in Charles’ words, is a house with a large number of small rooms, rather than one with a smal number of large rooms . The arrangement means that the house is surprisingly cosy despite its size and stone walls that in places are up to 3 feet thick. It is also rather like a maze.

Upstairs, the house has 4 bedrooms, plus there are a further two in the eaves on the third floor. The master suite, which is just off the first floor landing and runs the whole width of the house, comprises an attractive double bedroom with a dressing room  and ensuite bathroom. Pink in colour, the room has some original features including intriguing little built-in cupboards that are the width of a shoebox, a little open fireplace and, like most of the rooms in the house, pretty mullion leaded windows with victorian handles and hinges.

The pink theme is carried throughto the ensuite bathroom, where the walls have been sponged in a build up of colour ranging from a base coat of white, through pink and rose pink to a final shade of green. Fluffy towels pick up the colouring. “This room took up an enormous amount of time and paint,” laughs Charles.

The remaining rooms each have a character of their own. Ranging from the delicate colouring of the green guest room  with its fresh feel and white painted fireplace, to the prettiness of two further guest rooms with pink and cream shades on the walls, carpets and curtains.

One of the lasting impressions of the old vicarage is its abundance of fireplaces, and the first floor examples are beautifully intricate cast-iron styles dating from victorian times. There are also fireplaces in most of the bedrooms, while the black example in the pink-washed family bathroom offers a focal point to the modern room, blending both practicality and character.

Where there is a fireplace there is, of course, a chimney, which rather brings us back outside and at the end of our tour of Charles Latham’s extraordinary “castle” home.

The high, tudor brick chimneys are a dominant feature of the exterior, which when admired with the stones from Hadleigh Castle, the arched mullion windows, hand-made clay tiles on a peg-tiled roof, and the buttresses and eaves of the house’s architectural styling, all standing proudly amongst mature trees and reached by a long sweep, of shingle drive, make it a stunning home.

This magazine article from 2003 has been reproduced on this site courtesy of Essex Countryside, now Essex Life