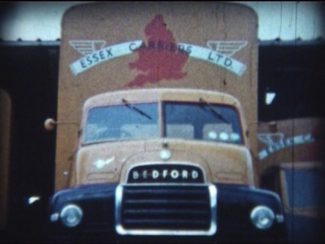 Essex Carriers was a Benfleet based road haulage company. Their depot was at Tarpots on the corner of the A13 London Road and Rushbottom Lane.

This video consists of four parts:

Shows Essex Carriers at work and some of the varied loads that they transported; from Heinz products, Libby’s milk and Johnson’s pledge polish to enormous pre-assembled building sections and large diggers.

Essex Carriers entered decorated vehicles in the carnival for a number of years.  They often used one of their heavy lifting vehicles as the basis of a float.  One shown in the video is their ‘flying cup’, which looks most precarious – what would Health & Safety have to say about that if somebody tried it now?

The company also owned Mrs Frequently, a 1930 Albion Merryweather fire engine, which was decorated and entered in the carnival.

Essex Carriers participated in Cricket and Football matches.  The football match shown took place on the playing field opposite King John School. If anybody recognises the venue for the cricket match please let us know where it is by adding a comment at the bottom of the page.

Drivers from Essex Carriers took part in the Southend round of the Lorry Driver of the Year competition.

There are several pages on this site that feature Essex Carriers, they can be found using the links below:

Essex Carriers Helped during the 1953 Floods

In Southend Carnival in the 50s and 60s