With her Old Friends 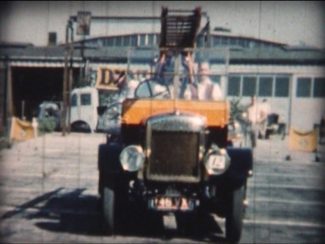 “Mrs. Frequently” was the name given to a 1930 Albion Merryweather fire engine that was owned by Essex Carriers Ltd, the road haulage company that had their depot at Tarpots in Benfleet.

It is thought that the original film for this video was shot at a Historic Commercial Vehicles Club rally that took place in September 1960 and started from the Tarpots depot.

‘Mrs. Frequently’ was a pun on the phrase ‘misses frequently’ used to describe a misfiring internal combustion engine (reportedly this was a misnomer as the engine actually ran very smoothly!). The owner of the company, Dick Brittain, took a liking to the name after he had seen it on a racing car at Brooklands race track.

More information is available elsewhere on this site at the link below:

More pages on this site that feature Essex Carriers can be found using the links below:

Essex Carriers Helped during the 1953 Floods

In Southend Carnival in the 50s and 60s