Peter and Olive Nunn Benfleet Shops part 1
G.R.Nunn the butchers - Peter's father - opened in 1924 (says 1928 on recording), descriptions of other local shops and their location in relation to G.R.Nunn, Bill Nunn - Peter's uncle - as the taxi driver, Olive's grand dad - Cripps - as the ferry man, shops in the village including identifying Olive's mum - Violet Margaret Smith (nee Cripps) and her grand mother, the Crown where Peter's uncle lived though he drank in the Anchor, Marie Nunn the barber, Nurse Valentine the mid-wife. (9 mins 57 secs)
Peter and Olive Nunn Benfleet Shops part 2
The builder of Hopes Green shops funeral, a description of the Hopes Green Shops in the 1940s, Olive's grand dad - Jesse Cripps as the ferryman, Glanfields the military uniform manufacturer, going across the creek to Canvey, the powder magazines. (8 mins 56 secs)
Peter and Olive Nunn Benfleet Shops part 3
Shops at Green Road, the four butchers in Benfleet, Maldon Iron Works next to the Hoy and Helmet where Peter's grand father worked, Chappel estates, Suggs the grover, the banks (5 mins 40 secs)
Peter and Olive Nunn - War Memories
The V2 bomb on Boyce Hill golf club, crater up at Fairmead road, a doodlebug story, Boyce Hill Golf Course was a training ground for tanks, the Bird's estate army camp. (2 mins 37 secs)
Peter and Olive Nunn - Canvey Flood
How they found out about the flood. Olive having all of February off from school due to King Johns School being part of the rescue. (1 min 8 secs)
Peter Nunn's job as a tanker driver
Driving petrol tankers through Benfleet, winter time problems in getting up the hill. (1 min 28 secs) 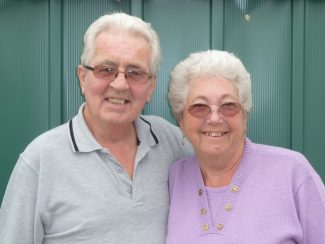 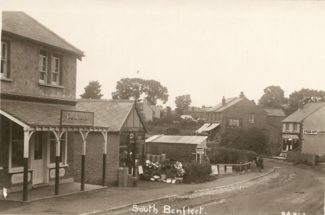 zoom
G.R.Nunn's butcher shop which is where Benfruit is now. This is where Peter grew up as a child.
R.F. Postcards collection 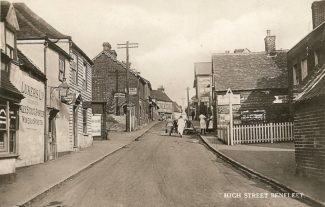 zoom
The original of people walking up the High Street Benfleet. Olive recognised two of the people.
R.F. Postcards collection

zoom
A blowup of the High Street photo. The two ladies on the right-hand side, who are talking together, are Olive's mother - Violet Margaret Smith - and her grandmother Mrs Cripps.
R.F. Postcards collection 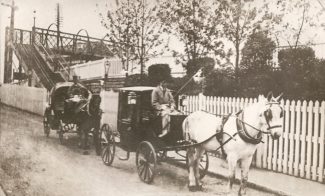 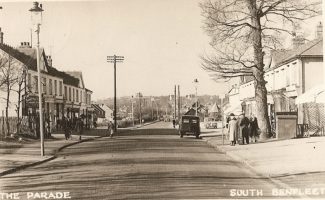 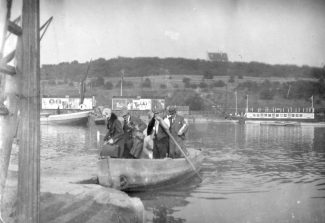 Peter and Olive Nunn came into the Library on Saturday 5th November 2011 and started talking about Benfleet. As we were running that month’s Library session for the Benfleet Archive we asked them if they minded if we recorded the conversation. They agreed and the recordings on this page are edited from that forty minute conversation.

Peter Nunn was born in 1935 and Olive in 1940 and they have lived in Benfleet their entire lives. They willingly shared their recollections on various topics especially shops. Peter’s father was George Nunn who was one of the four butchers in Benfleet. However Peter did not have a picture of his father’s shop which we were happy to supply him with.

Our thanks to both of them for their co-operation in recording these memories.

By Phil Coley and Pat Marshall