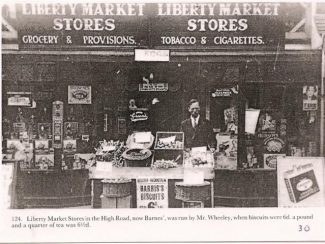 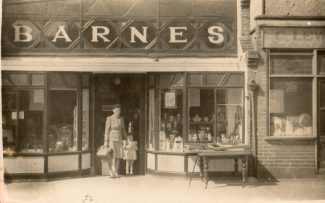 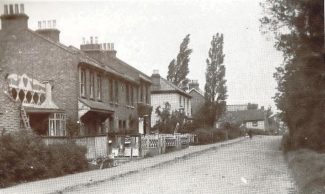 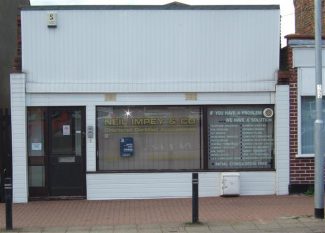 ‘Liberty Stores’  was situated in the High Road, opposite to where our Police Station now stands.   It was run by Mr.Wheeley in the times “when biscuits were 6d. a pound and a quarter of tea was 6½d.”     (Quoted from ‘Bygone Benfleet’ by Norman A. Chisman)

It was later owned by the Barnes family, selling bric-a-brac etc. and in the photograph we see Mrs. Yvonne Barnes with her young daughter Jackie standing in the shop doorway in 1948.  The shop later became a fishing tackle shop initially run by Jackie’s father Vic, and later by Jackie herself.

In the third photograph we see the High Road between Green Road and Hope Road in 1933.  The first building on the left, with the ornate roofwork, is Barnes’ shop. (Taken from ‘Bygone Benfleet’ by Norman Chisman) – and, in the last picture how the shop is now.

Jackie tells of many happy times growing up in Benfleet and remembers swimming and playing in the creek with her family.  As she grew older she would even take a boat out alone to fish, one of her favourite pastimes. Jackie is well known locally and is now retired and still living in Benfleet

See also our article ‘There’s a pub at the bottom of his garden!’, a story of Jackie’s father Vic Barnes.