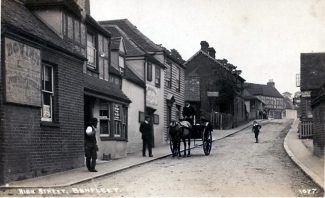 There have been many rumours about smuggling and Benfleet but evidence to support it is rare. However in various newspaper for 19th August 1913 a small item was reported which said:

SMUGGLERS’ STORE – A hidden cellar has been discovered at the Old Hoye Inn, South Benfleet, in which were four jars of sherry, which had evidently never contributed to the revenue of the country. Owing to the perforation of the corks, however, the contents were bad.