The Clergymen and Life at St George's Church 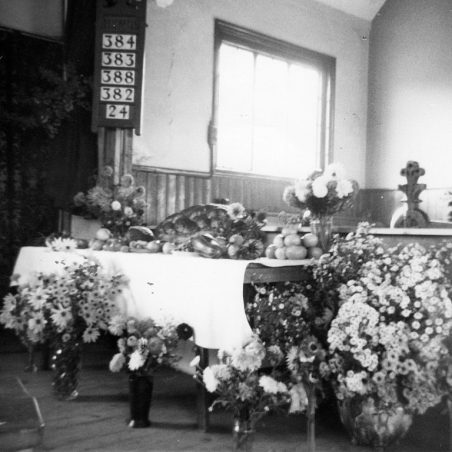 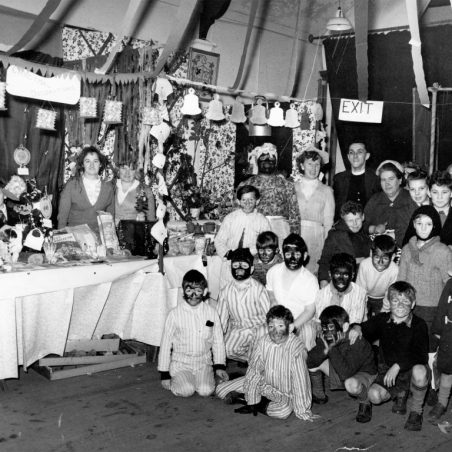 Christmas bazaar the old church doubled as a hall, Mr Marchant right next to door. 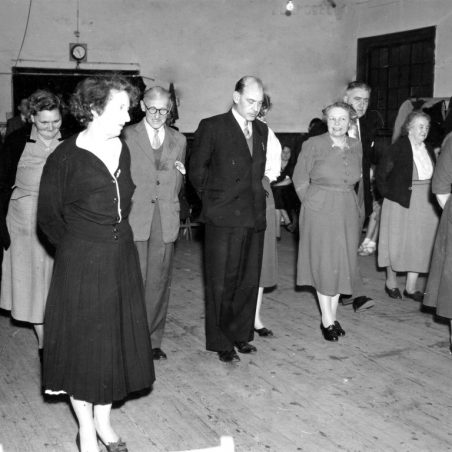 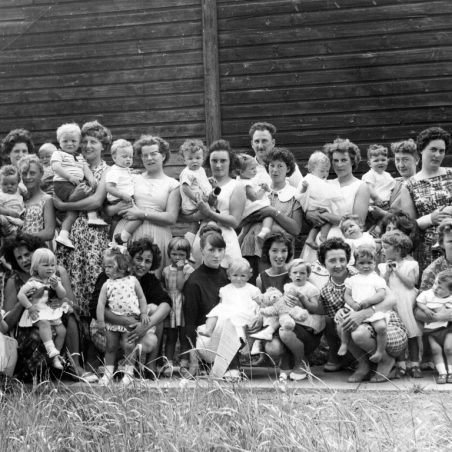 Parents and toddlers on Thursdays 1960? 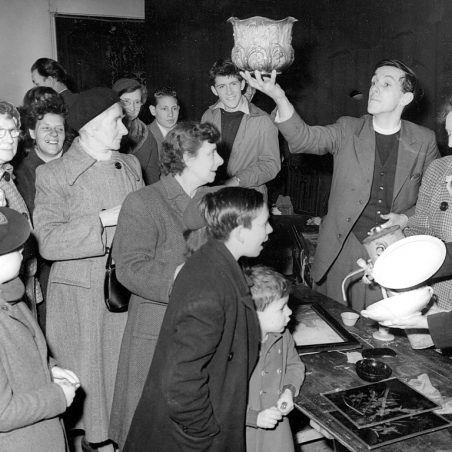 Reverend Carlos, next to him is Mrs Easter and Mary Easter. 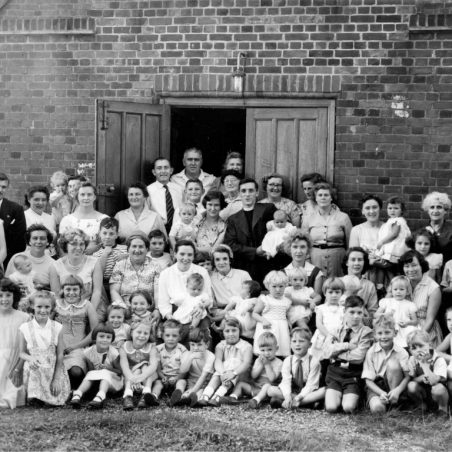 Parents and toddlers with Rev. Carlos. 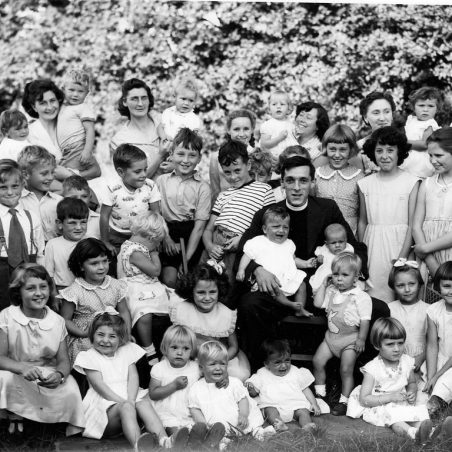 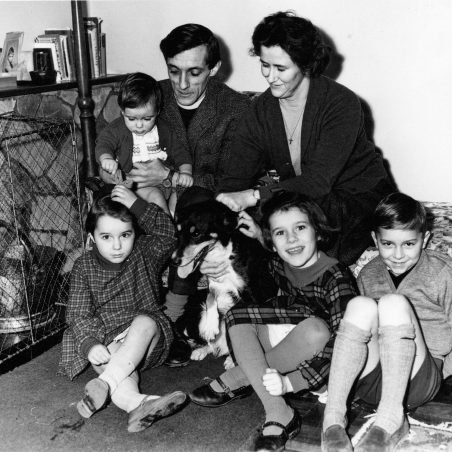 At the vicarage, Rev. Carlos, son Robert on his knee and wife June, at the front Susan, Ann and Anthony. 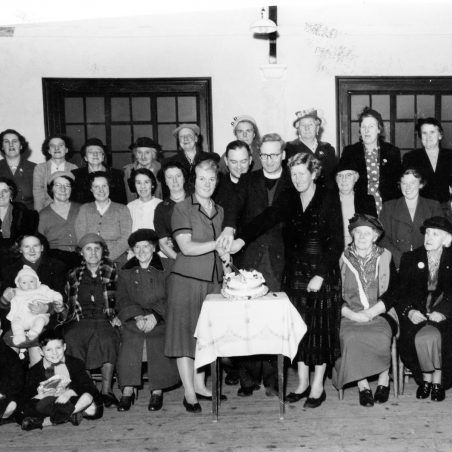 The Rev. Paul Booth & Rev. Woodstock from St Peter's, celebrating the old church anniversary. If you know what this celebration was about please add a comment at the bottom of this page. 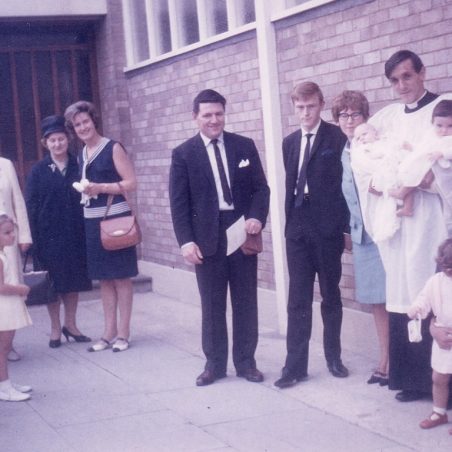 New priest at the Osborne's Christening 1963 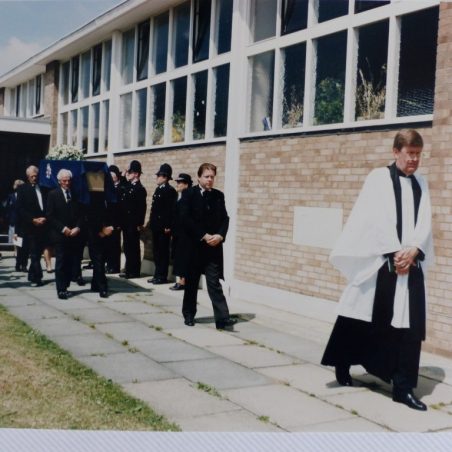 The Rev. John Kemp 1996. Police Guard of Honour at the funeral of DC. March, which was attended by the Chief Constable of Essex Police, John H. Burrow CBE. 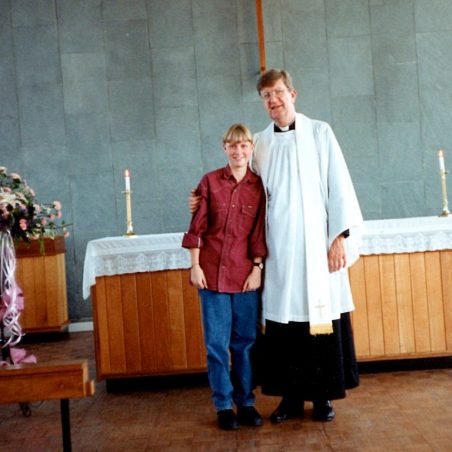 John Kemp at the altar with young member of the church. 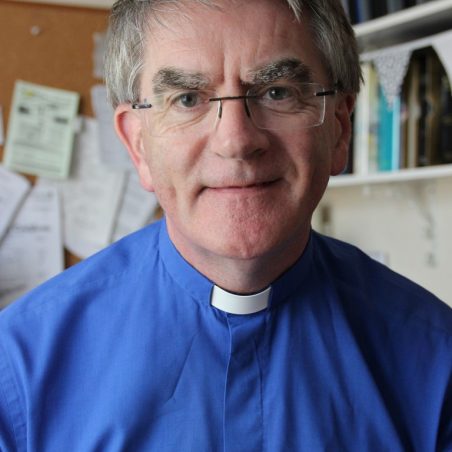 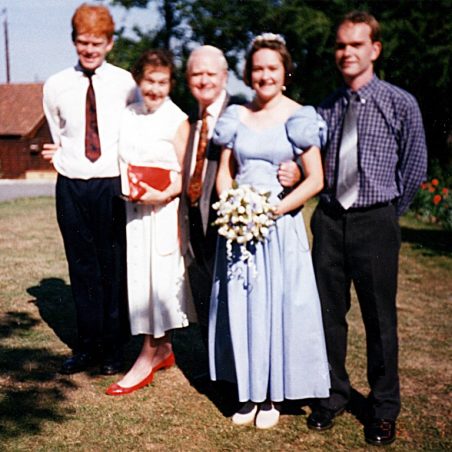 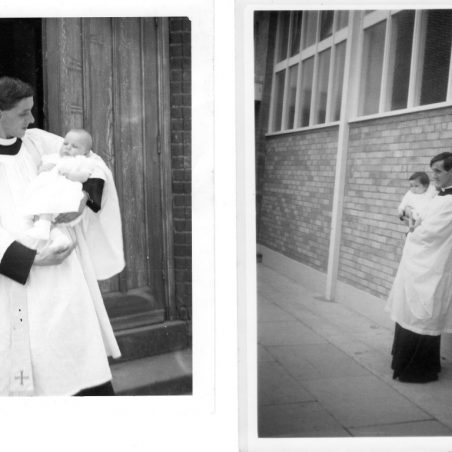 Rev. Carlos with baby after a christening. 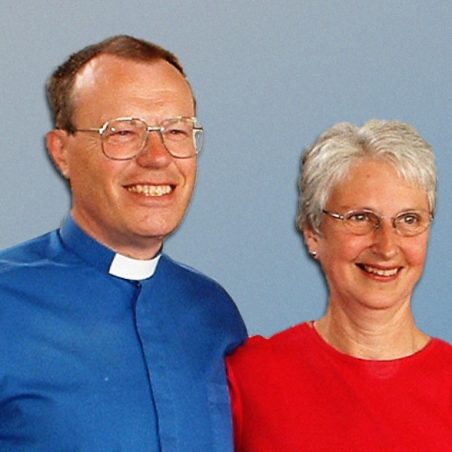 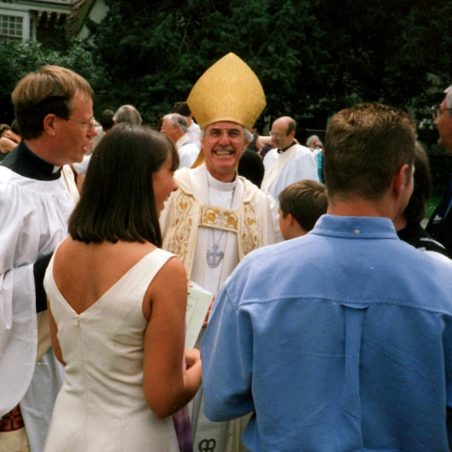 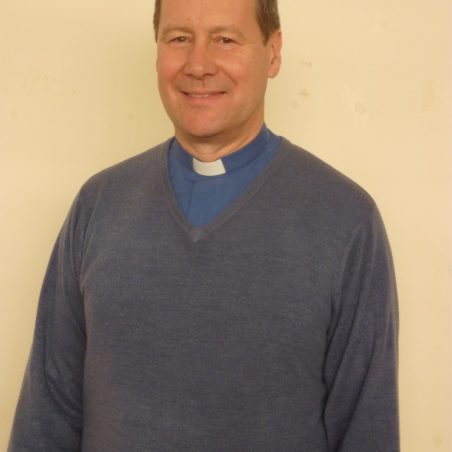 The first priest in charge was Reverend Francis John Carlos, he was publicly licensed  to take charge of St George’s Church in September 1957.

The next vicar was the Reverend Paul Booth, vicar at St George’s from June 1965 – Feb 1972. He was interested in drama and pageants and the children’s work really prospered.  He devised a special service called Family service, it consisted of simple prayers and psalms and a talk similar to a Sunday school lesson, this service became very popular.  While at St George’s he wrote two of the songs in the St George’s Church Song book, which are  ‘Who Put the Colours in the Rainbow’ and ‘When God made the Garden of Creation’.

Attendance numbers for holy communion increased from 1234 in 1961 to 2349 in 1968, numbers had almost doubled (numbers were not kept for other services).  Also at this time it was noted that people attending the church services were younger than they had been eight to ten years earlier.  This could be due to the increase in new housing and more young families in the area.  Reverend Paul Booth left St George’s in 1971/2

The next vicar was Reverend Edward Pilkington who left in 1978 for Theydon Garnon, Essex.

After an interregnum of 10 months John Kemp arrived 1st May 1979.  He gave St George’s services much less formality with new services, new music and songs and a participating music group, but always a blend of new and old.

“I arrived in May 1979. Sadly the church was in need of repair and to finance the work the church field had already been sold to Wiggins builders. It had been hoped to turn the Church into a Church/Church hall complex but it became clear that was beyond us at this time.  Instead in addition to the remedial work the church layout was re-ordered.

Our vision was to double the size of the congregation in numbers and that came after a few years because of the introduction of a weekly 11am informal service.  Throughout my time at St George’s we tried to build on the good things of the past and to have a policy of “both/and” so we retained the 1962 prayer book and welcomed new services.  We had traditional hymns and music as well as new songs, and a choir organ and music group.

Buildings were decorated and improved, the grounds were kept tidy and we used our Church Hall for the good of the community.  By the late 80s it became clear we needed more space and an extension to the Hall was built by the giving of members.  We faced and met the challenge of large increases in the family purse to the Diocese and did our best to maintain prayerful and financial support to Missions and Charities both in Britain and elsewhere. The Vicar became part-time chaplain at Bullwood Hall Prison from 1990 – 1997 and this allowed us to welcome the Rev’d Bob Wilkinson for three years.

Our concern was to tell the good news of Jesus to others and to encourage all our members to use their God given gifts to the up building of our church life and in out reach to the community. We did our best to welcome and befriend those who came through our Church doors and we were challenged to have ‘meaningful conversations’ with those who did not believe in Jesus and after each conversation a piece was added to a 2000 piece jig-saw which was eventually completed.

Home Groups, Children and Young People’s work, Uniformed Organisations, Christian concerts, Church Urban Fund, Flower festivals and involvement with other Churches in the area all contributed to the on going life of our Church.

I was so grateful to spend 19 years at St George’s and to see the Lord at work in and through us.”

The present vicar is Anthony Rose who arrived in July 1998 with his wife Jane and their three children Mark 11, Katy 9 and Alice 5 from Somerset.   He was collated by the Bishop of Bradwell on 29th August 1998.  The church was blessed to receive a curate in 1999 when the Rev’d Keith Foot arrived with his wife Jenny.  They lived nearby in a semi-detached house in Bartley Road.  During 1999 Jane decided there was a need for a toddler group and she restarted St George’s Parent and Toddler Group.

In 2000 a new youth group started in the vicarage.  The following year,2001, saw the launch of Legacy youth work in the church Hall and later on at Lambeth Road.  2003 saw the departure of Rev’d Keith and Jenny Foot as Keith was to become an incumbent in Chatham. Keith and Jenny will be remembered for their prayer ministry and training of others.  2003 also saw the arrival of Curate Rev’d Stuart Jermy with his wife Liz; they too lived in Bartley Road.

In 2004 Mavis Fawell, Mary Bridgeman and John Sutton started a Seniors Club every Tuesday afternoon in the church hall and it is still going strong. Also that year Peter Hillman started work as the Legacy Youth Pastor.  In 2005 the Legacy XS Centre opened in Richmond Park which is off the High Road in Benfleet. St George’s also aligned itself with New Wine Vision and Values.

In September 2006 after much deliberation the pews were removed and replaced with chairs, making the Church a more versatile space.  Some of the pew wood was used for other purposes within the Church.  Ernie Holland made some useful items such as candle holders and fruit bowls to sell to help raise funds.  During 2006 Anthony took a 3 month sabbatical to write a book called ‘Stranger on the Shore’.  It was a personal story of struggle with renewal and inner healing.

In 2007 Rev’d Stuart Jermy, his wife Liz and family left as he was to become the incumbent in Shropshire.  This year also saw the arrival of Peter Wilson, his wife Judy and children Suzie and Barney to take up the position of Church Army Parish Evangelist.

In September 2008 a new venture started on a quarterly basis called Blue Moon Café.  The Church is turned into a café style venue with live music.  This has been very successful and continues today.  Peter Wilson’s term finished in 2009 and he left with his family for a position nearer to London.

The Church saw the installation of a much needed kitchen in 2009 at the back of the Church.  This added to the versatility of the Church building as a more usable space, now there were no longer pews.

The church was blessed again in 2013 to receive another curate and Rev’d Peter Begley and his wife Fiona arrived.

Peter Begley left St George’s church to take up a post as vicar of St Leonard’s, Southminster and St Lawrance Steeple He became priest in charge on 10th February 2015.

There has long been an idea to attach a new church hall to the church and in recent years much progress has been made.  Plans were passed in April 2012 for a new community hall attached to the church.  For more details see New Church Hall.  St George’s recently celebrated its 50th anniversary with a free family fun day in a local park held on 28th June 2014 followed by a hog roast in the church grounds on Sunday 6th July.