You are here: HomenextBrowse ArticlesnextChurchesnextSt Marys Churchnext1994 and all that !

1100th anniversary of the founding of St Mary's Church 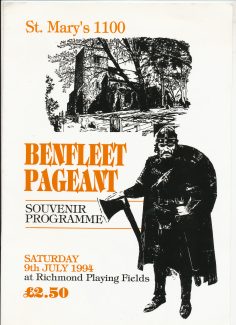 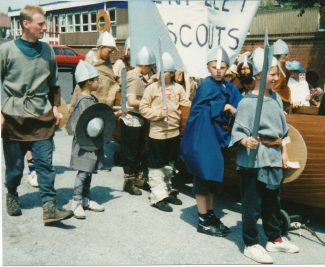 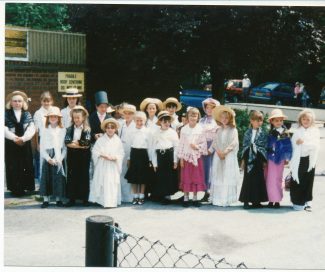 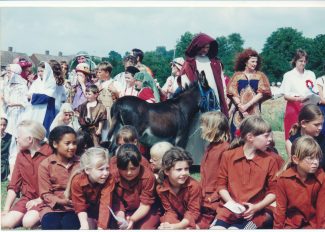 zoom
Brownies with biblical folk in the background
Sue Wise 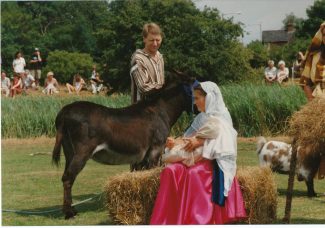 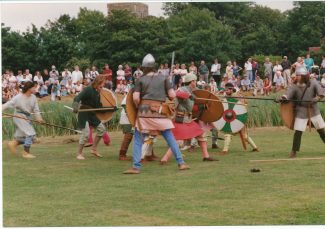 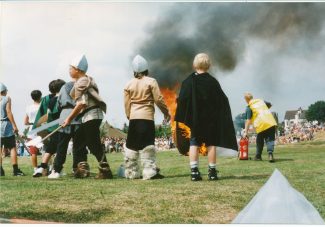 The Battle of Benfleet took place in AD 893 and a year later they built a church to commemorate the event. St Mary the Virgin. So it seemed only natural that in 1994 we should celebrate 1100 years of proclaiming the Christian faith in Benfleet. Throughout the year we were visited by numerous priests and bishops, had sponsored walks and bike rides, held concerts, put on a Flower Festival and I am sure other events I have forgotten. We did have the Duchess of Gloucester visit when they opened the new library but I think that may have been later. However, the biggest and perhaps most successful event was BENFLEET PAGEANT. It was also the most work!

(Please click here to view the Benfleet Pageant Souvenir Programme) and  further information and pictures of the event.

These things do not happen overnight and it was many months before that we first sent out feelers to get people interested in taking part. Diana, the visionary behind the event, had enlisted the help of Sally Lightfoot to direct the pageant. With the help of various historical experts she also produced an outline, which was distributed among the groups to allow them to develop their scenes. I can remember meeting in a cold church and making long lists on flip-chart paper, crawling around the floor, as we worked out who would do what.

The pageant itself told some of the stories of the history of Benfleet, from the coming of Christianity, through the Battle itself, the plague, the coming of the railway and the two World Wars, with a few other stops along the way. We had our own choir, three local schools, two sets of players, a dance school, Brownies, Guides, Cubs and Scouts and a Re-enactment group ‘Regia Angelorum’ involved.

My two sons being in the Cubs and Scouts, I got to see the making of the magnificent Viking ship (may even have had something to do with persuading them to give it a go). As a ‘Brown-Owl’ I directed my girls and the other Packs from the church in the ‘Coming of the Railway’. The train itself was made out of giant pieces of grey-board, painted with anything we could get our hands on. It was of course ‘Brownie-powered’ and we thought it was quite clever. Not so clever was my slicing through the top of my finger while cutting it out. I have been forbidden to touch Stanley knives ever since.

Somewhere along the way I was ‘inspired’ to write the words of our special song for the year, and a Paul Hillson, a former colleague at college, also the son-in-law of a fellow chorister, wrote the music. Everyone had to learn it! The choir had some other songs to sing and the music from the various groups taking part was gathered ready for playing on the day. It was so lucky we did this in advance, because our organist and choirmaster, who was the Musical Director, very sadly died the week before the pageant. He had only given me the tapes a few days before.

The dress rehearsal is a vague memory but I know that the first time it all came together was only a week or so before the event. Sally had visited other groups to coordinate the while, but it was all prepared much in isolation. Only she had seen it all!

The day itself, 9th July, dawned bright and sunny. The morning saw the playing fields behind the church filled with tents and stalls as the annual Church Summer Fete also took place that day, in a bigger way than usual. I remember setting up the Brownie’s Tombola stall, selling a few tickets, and then hotfooting it down to Benfleet School where the procession was to form up. Everybody looked glorious in costume and it was quite breath taking to see everyone assembled after all the waiting. Our May Queen, Pageant Queen and their court, in a suitable posh car, headed the procession, although I think I may have had to walk in front as part of the escort. In the parade we also had a donkey, the boys’ replica Viking ship, a church, a train and a lot of smiles. As we processed along the High Road people followed and joined in to support their families and friends.

Then the big moment came, the Pageant itself. I was kneeling nervously with the sound system, having been promoted to Deputy Musical Director, but I rather wish I had seen it from the front. The Danish Ambassador was the guest of honour and BBC Essex also gave a live commentary. It all went well, everyone acting, singing and dancing at their best. The highlight was of course the battle re-enactment and the burning of the ship – after all that work (but where would they have kept it?)! At the appropriate moment, after the Celebration song, right at the end, the Bell Ringers in the tower did their bit too. Magnificent.

It was a great event, where so many people in the town worked together and produced something to really be remembered. Afterwards someone said to me that we should do it every year. I think I fell over at that point!

Come and join the celebrations,
To last the whole year long.
For Benfleet and St Mary’s,
Come and sing our joyful song.

In eight nine four a stone was laid,
When battle had been won.
The strong church walls had soon be raised
A new age had begun.

Eleven hundred years have passed,
And our church stands here still.
A monument that’s built to last,
For man’s faith and God’s will.

Now to the Lord we turn again,
Our voices joined in praise.
To God our prayer we bring this day,
Our hearts and song we raise.