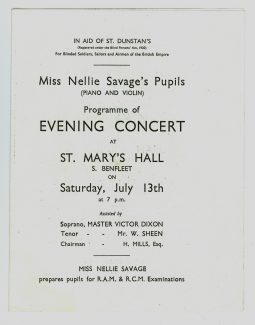 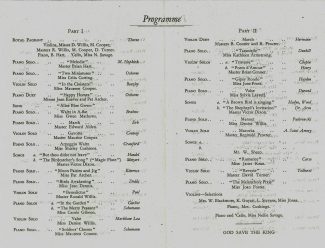 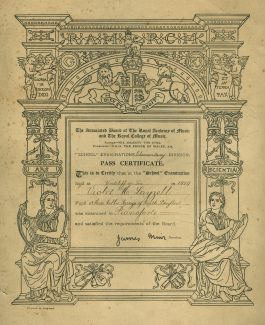 Established in 1915, St. Dunstan’s was founded by Arthur Pearson who lost his sight due to glaucoma.  Because of the increasing number of British soldiers returning home during the First World War suffering from blindness, Arthur Pearson established a hostel for these soldiers.  His intention was that, with training and assistance, the former soldiers could go on to lead productive lives.

In 2012, the name St. Dunstan’s was changed to Blind Veterans UK.

Although a date was not printed on the programme, the concert was probably held after the Second World War, in 1946.  At that time one of Miss Savage’s pupils, Miss Sylvia Layzell, was 16 years 5 months of age and accomplished to play a piano solo.

This article has only been possible by the kindness of Yvette Layzell who allowed the Benfleet Community Archive, access to her family history records.

Another of Miss. Savage’s pupils was Violet May Layzell, the sister of Sylvia.  Violet was indeed an accomplished player as confirmed by this original certificate awarded to her by The Associated Board of The Royal Academy of Music and The Royal College of Music, for an examination in Pianoforte, held at Westcliff-on-Sea in 1929.