The Maestro of South Benfleet 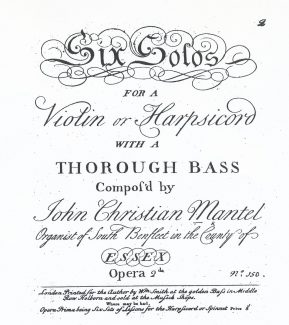 When Leigh-on-Sea musician and teacher David Galbraith found the music of John Christian Mantel in the British Library in London, he was not a little surprised and intrigued to find a reference to South Benfleet.

David’s passion is 18th century English baroque music and Mantel worked in that style. The printed sheets, almost complete, of six organ concerts, six violin sonatas and six suites for harpsichord described J. C. Mantel on the title pages as “Organist of South Benfleet in the county of Essex.” In the later publications that changed to “Organist of Great Yarmouth in the county of Norfolk and South Benfleet…”  Further manuscripts were found in the Fitzwilliam Museum in Cambridge, and Mantel mentioned more in his will. It transpired that in 1748 he was appointed organist in Great Yarmouth and he died there in 1761.

Francis Clerke’s Will Provides for an Organist

It was Francis Clerke, Doctor of Laws and rector of North Benfleet, whose last will and testament was to set the events in motion that brought the German musician,harpsichordist, violinist and composer to what was then the small riverside harbour-village of South Benfleet.

To his sister Sarah Mayer he left three houses in and about the city of London with the condition that within ten years of his death she should provide for  an organ to be erected in South Benfleet’s church of Saint Mary the Virgin and should then supply £30 yearly for an organist to play that new organ.

But the Mayers were not to choose the new organist. That was proposed to be left to the Corporation of the Sons of the Clergy – a charity obviously close  to Clerke’s  heart – with the proviso that preference should always be given to a son of a clergyman. That  move proved quite significant. The  clergyman’s charity accepted the task of appointing the new Benfleet organist in committee just three days after the will was proven in court, following Clerke’s demise at the age of fifty on October 31, 1734.

The man who dominated the English musical scene at this time was George Frederick Handel. He had serenaded Queen Anne when first arriving on these shores and had known her successors George I and George II in their native Hannover.

Some of his finest music was written for royal occasions, so an approach to him from the Clergymen’s charity would seem quite reasonable. Handel’s home was in Halle, Saxony, no great distance from that of Mantel. When Handel’s opera  Faramondo was produced by him at the King’s Theatre, London, in January 1738, a Mr Mantel was named as one of the sponsors. That is the earliest record  of Mantel in England so far found and would place his arrival here as sometime around 1737. Later Handel reciprocated by becoming a sponsor of Mantel’s music.

Just like Handel before him, Mantel had anglicised his names. Johann had become John and he had ditched the first half of his surname. Armed with that information, historians in Erfut in the former East Germany, were able to discover more about him.

Johann Christian Scheidemantel was the eleventh child of a Protestant pastor in a village close to Erfut. His father lies buried near the altar of the church he served for 45years. As well as Johann Christian, the composer, he sent three more sons to university in Erfut.

Around the summer of 1737, Handel became rather a sick man. Probably through overwork, he had no use in his right hand and by the autumn he travelled to Aachen “to take the waters.” Invigorated and revitalised, he returned to London by November 7th and set to composing again immediately. His new opera was Faramondo. It is well recorded that Handel stayed in contact with and visited his relatives on several occasions. His favourite neice, whose christening he had attended years earlier, had not long be married. The possibility exists that the recuperated Handel returned to England with South Benfleet’ s new organist, who may have sponsored Faramondo as a young man grateful for the opportunity offered.

Mantel’s organ in South Benfleet lasted almost to the end of the century. In November 1897 a new one was acquired, the old one having been sold by the vicar for £13.00 or £14.00 to someone who intended to rebuild it. Philip Benton, writing in 1867, mentions Benfleet’s organ as having been built by Gower of Kingsland Road, London. That may well be that very instrument.

Inside the church’s 15th century outer wall of the north aisle, a spiral staircase exits abruptly on the inner wall just below the roof. It once led to the organ and musician’s gallery. How often would J C Mantel have climbed those stairs to the organ gallery in the ten or eleven years of his stay in Benfleet? And where did he lodge and write most of the music he left behind?

Mantel’s music is very English and typical of its kind, in the style of Arne and Stanley. Secular, rather than devout, it seems to contain elements of Benfleet’s old “Hoy and Helmet” inn’s earthy ambience, but also recalls walks on lonely salt-marshes with only birdsong for company.

In 1748 John Christian Mantel moved up to Great Yarmouth to play one of the best organs in England “reputed to have a tone and power second only to the organ at Haarlem in the Netherlands.” His annual salary increased to £40.00 and yearly benefit concerts added to his standing. But that’s another story.