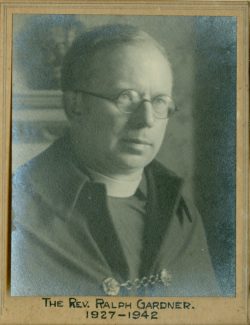 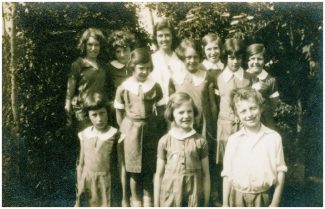 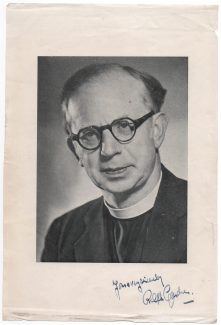 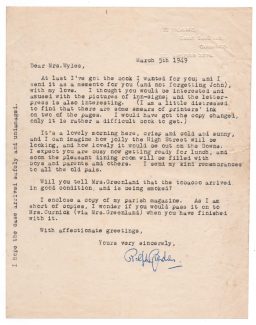 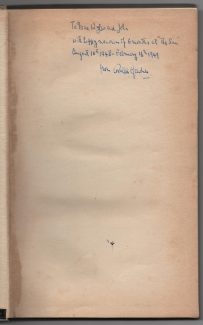 zoom
Note written inside the front of the book
Stuart Dobson 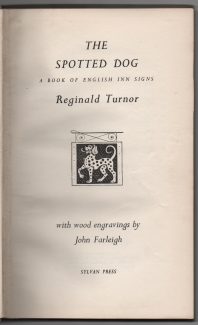 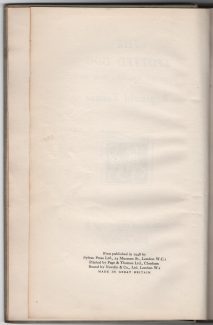 Ralph Gardner was born in Camden, London in 1893, the son of Edward and Clara Gardner. He was the eldest of two children, his brother Leslie being born in 1897.

He was Vicar of the Parish for fifteen years and saw many changes in that time.

An edition of the Chelmsford Chronicle dated July 1932 carried this small article which gave an insight into Rev. Gardner’s thoughts at that time.

The Rev. Ralph Gardner, vicar of South Benfleet, in a letter to his parishioners declares that the fourth Commandment is now re-interpreted in the following terms:-

…..but on Sunday, the dullest of all the week, thou shalt not smile nor go to the pictures.

“Remember the Sabbath day to keep it dull.  Six days shalt thou labour, laugh, and be happy, but on Sunday, the dullest of all the week, thou shalt not smile nor go to the pictures.

The Reverend Gardner and his wife Mabel enjoyed their time at Benfleet and an account of his days at South Benfleet was published in three parts in the Parish Magazine.

Link to Part 1 of the article in the Parish Magazine

Information on Reverend Gardner has been hard to find but we do know that he had at least one child, Christopher, who was a pupil at ‘Stanley House School’.

We believe Reverend Gardner died in Cambridge in the early 1970s.

If any readers can add to our information with more details of Reverend Gardner or photos,  please contact us.

In response to the above request, Stuart Dobson has added a comment below, along with photos that are on this page.  All of the images credited to Stuart relate to the comment added by him.

Hi, my name is Stuart Dobson and I found a book called The Spotted Dog from 1948 and inside is a typed letter and signed photo of a Reverend Ralph Gardner..
I feel this book may be of interest to someone, not least his surviving family.
Regards Stuart Dobson

We would like to thank David Pattrick who has supplied us with further information about Reverend Gardner, as follows.

I never met Ralph Gardner personally. His son Christopher talked about him from time to time to me. These memories are now fifty years old, so apologies for their vagueness!

He ended his priestly career at Godmanchester in Cambridgeshire; he died there in the late 60s. I believe that he lost his sight towards the end of his life.

If he were alive today he would be an enthusiastic user of social media. He sent round regular “ragbags” of thoughts and anecdotes to his many friends and correspondents. A selection of these was collected after his death and published privately. After the loss of his sight, he recorded his material and sent it around on cassette tapes.

He also recorded poetry with musical accompaniment. I have vivid memories of a tape of him reading “Victor” by W. H. Auden to the backing of Ravel’s Bolero. He had a marvellous speaking voice.

He was fascinated by modern technology and had the finest hi-fi equipment available at the time. His Tannoy speakers were enormous – they passed to his son after his death, and I can recall in particular hearing Stravinsky’s “Symphony of Psalms” in shattering stereo sound! His eclectic LP collection included composers such as Mahler, at the time very little known.

His son, Christopher, was rector of Orton Waterville, near Peterborough – he gave me my first job as a church organist. He was involved with the 20th Century Church Light Music group and was proud that the modern tunes for “At the name of Jesus” and “O Jesus I have promised” were composed on his piano. Sadly he died not long after contracting Parkinson’s disease in the 70s. He and his wife Carolyn had two children, Rebekah and Nathan.

We would also like to thank Fiona Thomson who has sent us her memories of Reverend Gardner, as follows:

Rev Ralph Gardner was the vicar at St Mary the Virgin. Great Shelford near Cambridge  when I was a child.  He christened both my brother (in 1959) and my sister (in 1963). His successor, Richard Hale, asked him to help with the confirmation lessons in conjunction with the Deaconess, Miss Hetty Wyon. They did my confirmation classes.

When he retired he went to live with some great friends, Ione and Thurstan Shaw, in Stapleford, the next village. He was a great friend to our family and we often visited, just popping in after school. My mother was particularly close to him – I think he was a kind of mentor, a confidante if you will.

He was buried in Great Shelford Church Yard. After my own wedding  I remember placing my bouquet on his grave. I now live in the far north of Scotland and haven’t been back for many years but I understand his grave has been relocated as part of the construction of a new parish room.

He was the founder member, in 1950,  of the writing and poetry group which my father belonged to; they produced quite a few small booklets of their writings – Ralph producing a vast quantity of material. They also gave readings of their works. When his blindness overtook him, he recited to specially chosen music. He produced a regular newsletter called Ragbag – a collection of his writings and news.