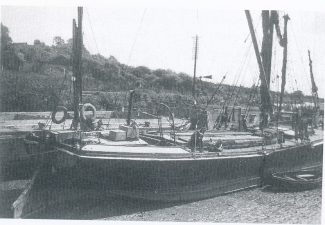 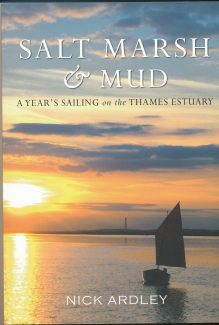 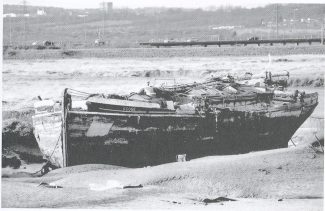 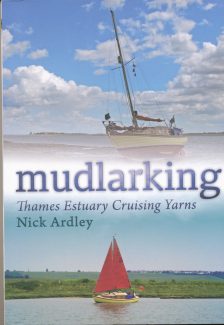 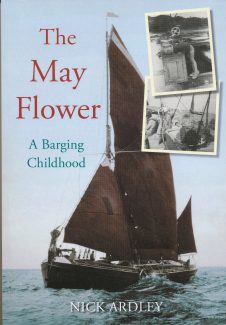 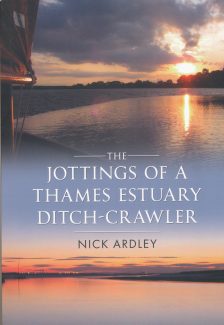 For those Benfleet folk who love anecdotes relating to boats, sailors and sailing, Nick Ardley’s quartet of books on his family’s adventures in the Thames estuary will provide a source of both information and amusement. In these four books there are many references to Benfleet among the multitude of Essex, Kent and Suffolk locations.

The story begins with his parents purchasing a Thames spritsail barge.   Barges at this time were often converted to houseboats, but the May Flower was bought with the purpose of both living on and sailing her.

From Hoo to Benfleet

Built at Rochester in 1888, it traded for a number of different owners, carrying anything from maize to tarmac right up to 1950 when Nick Ardley’s parents purchased it.

On 6th April 1929 a cargo of flints was carried from Hoo to Benfleet, arriving on 8th April. The barge was not to return to this port until my parents sailed her up to a berth just below the old bridge across to Canvey Island in the summer of 1954.

The wharf was located on the Benfleet shore, more or less where the tidal barrier now crosses the creek, above the Dauntless boatyard located on the Canvey side. The creek from Hadleigh Ray in those days had a deeply dished and wider channel. The boatyard was relocated east of the barrier when it was built. My mother recently recounted to me that the voyages were accomplished entirely under sail. On the voyage up to Benfleet, the wind was in the easterly quarter, and the more normal conditions prevailed for the return, with winds from the westerly quarter giving them fairweather sailing; she told me this with much pleasure.

Still in the age of steam

In those days the old bridge still allowed passage of waterborne traffic –  unlike today where authorities appear to do their best to ignore maritime elements in favour of permanently fixed structures.  The railway was still in the age of steam: no overhead cables straddled the tracks sitting below the hills of Benfleet Downs.

The Dauntless Yard looked very different too, the creek was virtually clear of moorings except for those on the Canvey shore. Another barge later used a berth on part of what is now the site of the Benfleet Yacht Club, along the Canvey shore below the bridge;  This was the “Maid of Connaught”. My parents became quite good friends with the old boy who ran a little moorings situated just above the bridge, on the site of the old ferry. It was here that the Ardley family used to lay up their yachts during the winter months,over a number of years.

Many years later we came up to this spot in the barge boat, while we were moored, off Leigh during a summer in the early 1960s.  The first and original bridge was still in operation and the Dauntless yard was immediately to the east of the bridge, on the site of the present tidal barrier.

My parents, returning from visiting the “Maid of Connaught”, rescued a couple of lads who had been playing in a dinghy. They had  been swept down to the bridge and were pinned by the fast flowing ebb tide  against a buttress  and were hollering loudly for help!  We, the children, had been left to look after ourselves and eat icecream, which as I remember, could be obtained from the hut of the boatyard.  Unfortunately, a bee was attracted to my sister’s icecream, which resulted with her being stung on the lip  – oh what a to-do !

While the first book was largely an account of his parent’s barge sailing adventures, the next 3 books  largely relate to his ( “The Skipper”) and his wife’s (“The Mate”) adventures starting with “Salt marsh and mud.” Here he reminisces about following in his parent’s footsteps.

Barges would go up to a wharf above the causeway and take on hay for London’s horse population up to the mid 1930s. The skipper had found records of the “May Flower” trading up to Canvey and Benfleet to load hay during the 1890s.

He marvelled, briefly remembering that his mum and dad had sailed their barge this way over 50 years  before, on a passage to Benfleet, where they lay for some weeks. The skipper reckoned that that voyage was the last time  a full sized barge had made a passage up the creek, purely under sail, although a little farm barge rebuilt during the 1950s, the “Cygnet”had subsequently done so.

The skipper, though, began to miss the glory of the open marshes in those late winter weeks with a hint of the coming spring. When seen from the water, up Benfleet Creek, amongst the tranquillityof the salt marsh maze, it was he always said, an absolute treasure.

As with other notable sailors of our waters there is always at least one story about miscalculating where the mudbanks are and being marooned.

The skipper’s father and his crew were attempting a circumnavigation of Canvey Island aboard the family yacht, “Lynette”. In those enlightened days, it was  possible to take a yacht round the island : the bridge at Benfleet was an opening affair. A lift and roller mechanism allowed the span to be moved clear for river traffic  – that was no longer the case: u nlike our continental cousins, we, in the British Isles, have, it seems, done our very utmost to obstruct minor, but historically navigable waterways, one by one, and it should be said, continue to do so.

The skippers father had cut across a bend in the creek and had a mile to hike across the marshes and along the seawall to the bridge, then a long walk to Leigh. It took them a week to dig it out !

His own case of misjudgement the skipper put down to daydreaming, but the mortification felt when a local living in a house that overlooked the creek later uttered the immortal words “Bit of bother the other day” was to remain in his memory for years.

In “Jottings of a Thames Estuary Ditch Crawler”, his fourth book, Nick turns his attention to the local boatbuilders …

Down on the waterfront at Leigh was the yard of Sea King, and up Benfleet creek, by the bridge onto Canvey Island, was Dauntless; both were then building little clinker sloops and cutters. The Dauntless boats  had a very dinghy-like shape to their hulls, with a shallow keel, and were often internally ballasted too…They made relatively inexpensive river craft, capable of crossing and traversing the estuary.

The sailing vessels ranged between around nineteen feet, up to a larger twenty three footer by the time the yard stopped building wooden boats by the end of 1973. Dauntless had also built a range of motor boats up to twenty four feet in a cruiser and day-fishing version. It seemed that the company could do anything to fit in with a prospective owner  and some 2000 craft left the yard.

The Nore race, a Thames estuary race, had been inaugurated by the Benfleet Yacht Club in around 1925. It was initially sponsored by a local man, Mr Garon. The club (founded 1922) was based on an old spritsail barge from about 1927 to 1935. Later, in 1946, they acquired the Inner Dowsing lightship, built in 1840.

In the 1970s, it and the club were still situated above the bridge at a wharf, but the building of a new fixed roadbridge across the creek mean’t a move and the club had relocated on to Canvey Island, below the Dauntless yard.

The tidal flood barrier had also been built since .  Their old lightship was finally sold in 1984 to interests on the Medway  and became a restaurant . The yacht club had then moved into their purpose-built clubhouse on the island.

The world had overtaken her

The skipper goes on to mourn the demise of the spritsail barge “Scone” in its final resting place at Benfleet : The scone had initially been brought into that backwater as a temporary measure, but the world had overtaken her and her time was up, it seemed. T he remains are just west of the road bridge.

Standing with his mug in hand, the skipper’s thoughts wandered to a collection of craft that sat in marshy rills just beyond the bridge  – Benfleet Bridge. He grimaced, slightly,and said, that lot wants clearing up…It was a motley cluster of vessels; many had sprouted huts and were obviously being used as houseboats. That in itself had never bothered the skipper, but the general untidyness and unkempt aspect it presented had.

Water and marshes in their glorious hues

He felt that it gave the area a poor image, however picturesque it looked on the day of a high  tide, brilliant sunshine and blue sky that  coloured the water and marshes in their gorgeous hues.

Nick completes the fourth volume with a reference to his collection of sailing books. The skipper enjoys the accounts of earlier sailors who explored the creeks of Essex, Kent and Suffolk, such as Magic of the swatchways by Maurice Griffiths. His books were arranged awry.  Books too were scattered at his feet.

He felt supremely happy. He was as elated as if he’d just got back into his mooring after a thumping thrash up Benfleet Creek…

The book details are as follows :-

The May Flower: a barging childhood published by Tempus Publishing in 2007

Salt Marsh and Mud: a year’s sailing on the Thames estuary published by Amberley Publishing in 2009

The Jottings of a Thames Estuary Ditch-Crawler: published by Amberley Publishing in 2011