From Benfleet to Tahiti 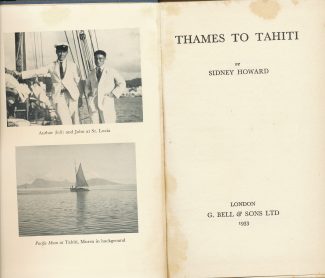 Sidney Howard was a member of the Benfleet Yacht Club and wrote a book, Thames to Tahiti in 1933, about his sailing experiences on board a 38 foot cutter, Pacific Moon.

It described how he and a companion, John Johnstone, neither of whom  had much knowledge of navigation, managed to sail over 12,000 miles in 13 months, as the book title suggests from the Thames to Tahiti in the southern seas.

Sadly the voyage was preceded by his wife’s death by drowning when anchored off Leigh on Sea. There were no witnesses to this event so the cause of the tragedy remains unknown.

One year on and Sidney stops work, sells his house and purchases a half share in Pacific Moon. Unfortunately his partner withdraws, leaving Sidney up a gum tree. Eventually he finds a new companion and buys out the other half share.

On Friday 12 June 1931, after hoisting the Benfleet Yacht Club pennant, the adventure started. The plan was to undertake the voyage  one step at a time…Dover to Falmouth via Boulogne and Cowes and then to the coast of Spain being the first stage.

On the Boulogne to Cowes leg of the journey they were reassured by the shipping forecast, which predicted the continuance of light airs from the south and south-east. Needless to say they were having a Michael Fish moment!

Bang!  A squall hits the yacht from the south-west. The blow strikes her like a hammer and knocks her over at an alarming angle. With the jib topsail in ribbons and fouling the main jib sail, their adventure nearly suffered an early exit. The storm in the Channel was such that a French excursion steamer sank with the loss of 400 people and roofs were shattered as far inland as Birmingham.

Their worst experience on a 12,000 mile journey was ironically in home waters, though apparently starting a journey on a Friday is bad news according to maritime superstition.

Any information on his life after he returned to England in 1932 would be most welcome….did he, for instance, return to Essex….did he remarry….did he sail again?