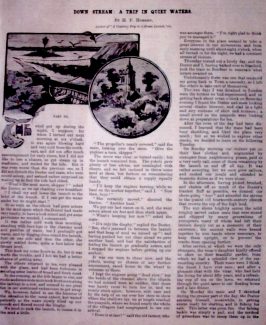 zoom
"DOWN STREAM : A trip in quiet waters" a story by Henry for the Boys Own magazine published in 1899

Henry Fuller Hobden 1861-1935 was the brother of the artist Frank Hobden and a fellow resident of Benfleet.  He was an editor and a major contributor to the Boys Own magazine. Like his brother he was a keen sailor, but unlike his brother he was married.  His wife Florence Surmon was born in 1857, married in 1884 died in 1925. As mentioned in the Frank Hobden piece under category Art and Artists they shared accommodation, latterly in Vicarage Hill. The year of their arrival in Benfleet is unclear but various directories give us the clue that it was before 1908. An example of his writings for Boys Own is reproduced here  –  to view a larger print click here .