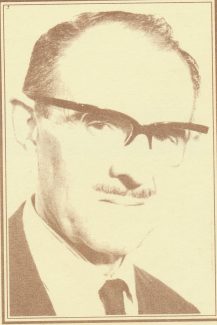 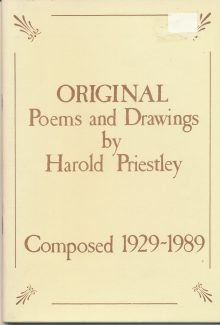 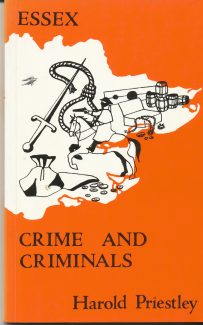 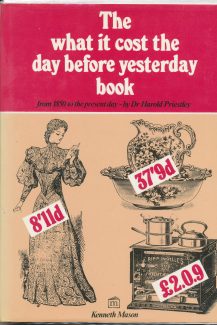 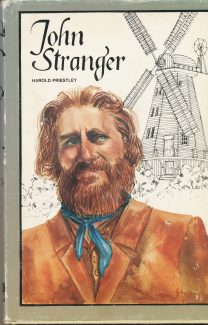 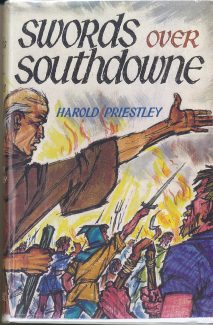 Harold Priestley, although best known in Benfleet as a local historian, was also an artist and writer.  Not only a writer, but one who embraced poetry, novels and factual books.

Examples of his poetry may be found in the anthology entitled “Original poems and drawings” published in 1991 after his death. Although Benfleet is not directly mentioned, I wonder if he had it in mind when in his poem “I know a land” he wrote:

I know a land in a northern clime

Where swallows dart above the eaves,

And thrushes warble among the leaves.

There may be lands where the bison roam,

And the mustangs prance in their prairie home;

There may be lands ‘neath the Southern Star

Where the people dance to the wild guitar,

But the land that I live in  is better by far

As for his factual books, “Essex crime and criminals” (1986), includes 3 Benfleet examples : –

1)   “In 1415 John Dekyn and John Ways of South Benfleet were fined four pence each for an assault on the constable, Thomas Odam.”

2)   “John Garrett, vicar of South Benfleet, who, after refusing to wear the surplice and being reprimanded by his church warden, Henry Wood, came to the house of the said Wood with his bow and arrows ”  and lastly an example of an early child support agency :

3)   ” On 12th December, 1799, Sarah Smith, a young unmarried girl of South Benfleet, was taken by the 2 overseers of the poor before the local justice of the peace  because she was pregnant. ”  In those days the cost of maintenance fell not on the state, but on the parish. Sarah swore an oath before the Justice that the father of the child was John Chapman, who lived at Horndon on the Hill.

“The young man had to be apprehended, so the overseers and the parish constable, William Rodd , a local cordwainer or shoe-maker, went to Horndon , caught up with Chapman and brought him and his motherto South Benfleet.

A marriage licence was speedily procured and, on 15th December…Chapman finally lost his carefree status and became a married man……Within a fortnight he had absconded. He was caught and brought back handcuffed to face his family responsibilities .  The child was born in February and the matter settled at a cost to the parish of £6.48.”

“John Stranger” a novel set in Napoleonic times, tells the story of 2 orphans placed in the Upminster workhouse. However it is the time of the Peasant’s Revolt that provides the background to Harold’s Benfleet novel “Swords over Southdowne.”

The Time is June 1381. Tom Bloom, Ned Clobbe, Walter Game and other bondsmen of an Essex village are caught up in the movements of John Ball’s Great Company.

Goaded to rebellion by the tyranny of their feudal lords and the new poll taxes, the peasants are on the march to London in their thousands. Their cry is “Kings and Commons!” and their purpose is to rescue young Richard  the Second, their “Lovely Boy”, from the arrogant lords who surround him.

Manor Houses are sacked and the manor rolls , records of bondage, go up in flames as the little group of villagers make their way with the throng of peasants to the bivouac east of Aldgate.

In the terrible fortnight which follows, their eyes are opened : the burnings, the executions, the excesses of the mob in London and the false promises of the king teach them that an earthly paradise is not to be built in a day, and the final tragedy of the Battle of Billericay brings them home, reduced in numbers and battle-scarred, to the realisation that though men may be fickle and treacherous, the sun, the rain, the homestead and the good earth of one’s own fields are for ever constant”

The farm “Southdowne” is now the open space of Benfleet Downs and many of the character’s names are taken either from Benfleet rolls or other Essex places. Benfleet’s manor rolls only go back to1405, and the book suggests earlier ones may have been burnt in the revolt.

The only Benfleet man known to have taken part in the revolt was Thomas Spragge.  Place names have changed in some cases, but the Crown Inn, formerly the Mitre, is still familiar, as is Tarpots.