Ode to the Anchor 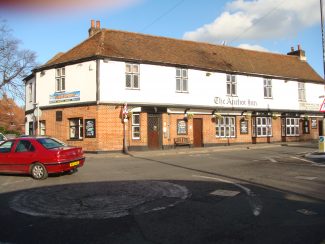 I know an inn where they will take you in,
If you only like to try;
So call at the “Anchor” at Benfleet-on-Mud,
When you’re feeling extra dry.
Teddy Land is the landlord, a jolly old sport,
You will always find him there;
He’ll serve you in, and he’ll serve you out.
But he always cheats you fair.

The whisky’s good and the beer not bad,
But the square-face is the best;
There’s good entertainment for man and beast
At this ancient smuggler’s rest.
You may play at crib, if you want a game,
And have plenty of time to spare,
But watch old Ted ,when he shifts the pegs
And see that he’s marking square.

You’ll hear such yarns in the private room
That you’ll open wide your eyes;
They will tell you tales of the Buster days,
And a pack of blooming lies,
They will talk of the time of the Canvey plots,
When good lunches to all were free;
Of Amsterdam and of Rotterdam,
And of many a damn good spree.

From Bygone Benfleet by Norman Chisman

By the 1911 census Eveline and the children are living in Herne Bay, Kent. I suspect Samuel was absent on business at the vital moment. Whether he ever returned to Benfleet I do not know, but it seems strange that he put pen to paper in 1918 so many years after he left. All I can say is that the Anchor must have made a big impact on him!