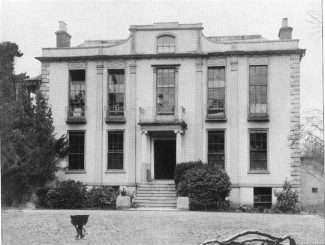 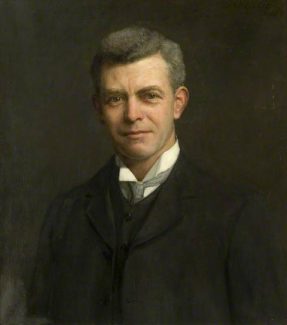 Until 1876, when I was nine years old, my parents lived in Hadleigh House and the boundary of Benfleet Parish passed through the porch thereof.

The house was an attractive one, built of timber and plaster in the Regency period, but it was anything but convenient or even sanitary according to present day ideas; the kitchen was in the basement, all the water had to be pumped, there was no gas nor, of course, electric light; all hot water had to be boiled in kettles or a copper; toadstools grew under the floors of some of the bedrooms, and there was a cess-pool for the sink wastes under the kitchen floor. However, there was a lovely garden full of fruit trees, and I was very sad when my parents left it and went to live nearer to London.

After 1876 Hadleigh House was let to a succession of tenants and was eventually bought by the Salvation Army and given the name of “Victoria House”. It was allowed to fall into decay and was pulled down and its site built upon, but some of the outbuildings were still existing when last I passed the place.

South Benfleet in 1876 had a population of less than 500, and there cannot have been at that time more than 200 inhabitants on Canvey Island. Benfleet village extended from the Wharf to the Anchor Inn and up the Endway which ended in the field gate leading into Reeds Hill Farm and the footpath across Poynetts Farm to Hadleigh. The railway had been in existence for about twenty years; all the trains ran via Tilbury; the Upminster line was not built until about ten years after we left and the Great Eastern line to Southend was built about the same time. The London-Tilbury-Southend line terminated at Southend where there was a grass plot opposite the station with a flag staff in the middle.

Beyond the village of Benfleet there were only isolated farmsteads and a few cottages besides the Vicarage, then quite a new building, and Hadleigh House. The three inns  – the Hoy, Anchor and Crown – were more or less as they are at present, but both the Hoy and the Anchor have been considerably modernised. There were practically no modern buildings in the village, many of the cottages and some of the farmhouses being several centuries old, and nearly all of them were built of timber and either tiled or thatched. The village was beautiful, and though there was no water supply, gas or electricity, life was not so dull as might be expected.

The Church had been partially restored before 1870, and I remember its interior with blue texts round the arches and evergreen wreaths twisted round the pillars. The main fabric has not been altered in the last seventy years, but a good deal of refurnishing has been done, and in 1876 the inside of the church was rather bleak.

The Vicar was Mr. Henderson whose portrait may be seen on the screen in the church together with that of Mrs. Henderson, and church life in Benfleet flourished in those days more than it seems to have done in many places. So far as I can remember there were only two shops – a general shop and a bakery at the Post Office.

….people rode, or drove or walked, and thought nothing of distances which would shock the present generation.

There was no resident doctor nearer than Rayleigh until about 1890. Seventy years ago Dr. Cole used to ride on his black horse to attend to serious illnesses or accident. Bicycles were practically unknown; people rode, or drove or walked, and thought nothing of distances which would shock the present generation.

Among my reminiscences are the regattas at Leigh and Southend which were great events in the district. Then, there were long rides with my mother who was a good horsewoman; on one occasion I remember seeing a threshing machine in the middle of the River Crouch at Battlesbridge.

At one time there was a scare following a rumour that a gorilla had escaped from a menagerie into Benfleet woods. I can still recall the sight of the brothers Shelley at work in their saw-pit at Thundersley, and the awe inspired by the sight of the curate of that parish who suffered from baldness and wore alternately two wigs of different colours. My most lively recollection is of the old railway station – seeing a porter lean a barrow against the wall whereupon the wall fell down!

The above article appeared in the January 1947 edition of the South Benfleet Parish Magazine.  The two pictures shown on this page were not part of the original article.