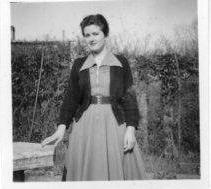 zoom
A photo of me, Betty Light, taken around 1952 just before my 16th birthday.
Betty Turpin nee Light 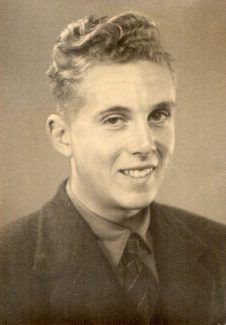 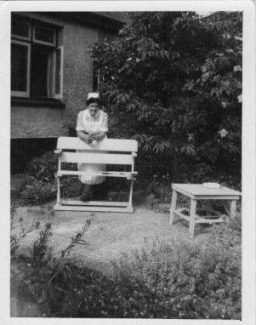 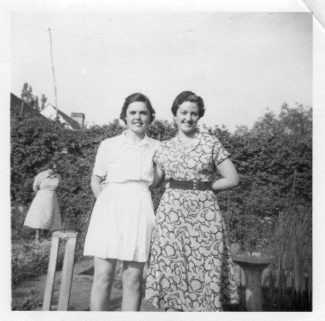 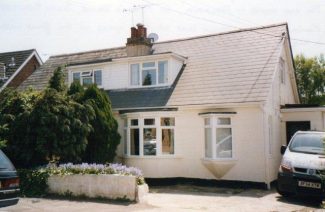 zoom
The location of the bungalow. This photo taken in 2006.
Betty Turpin nee Light 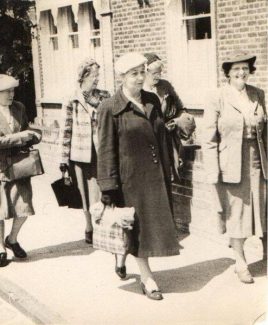 What a wonderful website this is!  I only discovered it recently but have spent many hours exploring it already.  I have put various comments in the Schools/Dr Eaton/Bread and Cheese Hill/Methodist Church sections but would like to add some more memories and ask a few questions.

Dr. Eaton senior brought me into the world in September 1936 at a house called “Derekville” in Brook Road.  My brother, Peter Light, was six and a half years old by the time I arrived and already a pupil South Benfleet Primary School.  He insisted that my middle name must be Pauline because he liked a little girl who sat next to him in class who was called Pauline.

The photo of my brother was taken when he left Westcliff High School at 18 years old, just before he went into the army to do his 2 years National Service which he did before going to university – I think by choice.

When I was about two years old we moved to “Arcadia” in St Mary’s Drive and it is the fourteen years there that I remember as my childhood.  We lived near to the woods and fields that were at the top end of the road – at least they were in those days, now I believe there is a road through to Norwood Drive.

My favourite place as a child was a hill always referred to as “The Rabbit Warren” reached by a path through those fields.  Hours were spent playing in the trees on the top of the hill, sometimes with friends, sometimes alone when, if I kept quiet and still enough, the rabbits would appear.  Needless to say, even now, at 77 years old I just love the film “Watership Down”!

Exploring this website I have not seen any mention of the Women’s Institute in Benfleet which was an important part of my mother’s life during the 30’s, 40’s and 50’s.  She was always known as “Mrs Light” rather than by her christian name of Lucy,  John Downer reminded me of that after he read my comment in the Methodist Church section.  At various times my mother was Treasurer, Secretary, organised coach trips, sang in the WI choir and acted in the Drama Group.  Does Benfleet still have a Women’s Institute I wonder? As a pre-school child I can remember accompanying my mother to the monthly meetings and all the other activities with which she was involved.  I was always armed with colouring books and crayons and would happily kneel on the floor, using a chair as a table, colouring in pictures for hours.  Even after I started school I often used to go on the coach outings – one memorable one was to the Dr Barnardo’s Home at Kelvedon, a village between Chelmsford and Colchester.  I was eight or nine years old at the time and decided there and then that I was going to be a Barnardo Nursery Nurse and work in that particular Home.  Eventually, that is exactly what I did, starting my training a couple of weeks before my sixteenth birthday in 1952.

An Outing To Felixstowe

In picture 6 the five ladies are on an outing to Felixstowe, probably a W.I. outing but it could be a Methodist “Sisterhood” outing as my mother was very involved with both. My mother, Lucy Light, in the foreground in the dark coat.  Next to her, a Mrs Vernon. Behind my mother, in the check jacket, Mrs “Dorrie” Downer – John Downer’s mother. Next to her, nearest the building, Mrs Lawrence who lived opposite to us in St Mary’s Drive – very sadly lost her only son, Derek, with polio in the late 40s or early 50s. The other lady on the extreme left of the photo I remember but her names escapes me now!

One of the comments in the war-time section recalls that infants did not go to school until they were six years old but I always thought I started in 1941 just a few days before my fifth birthday.  Miss Gale, who was the Headmistress at the time, told me off because I was crying and told my mother off because she didn’t want to leave me while I was upset!  I think we were probably both frightened of Miss Gale on that occasion but we later came to respect and like her a lot.

Memories Of The Shops

…we walked down the hill and across more fields to the railway line. No electric rails to worry about then and a clear view of the track in both directions so we were quite safe as we crossed but I think we liked to feel it was dangerous..

During the summer holidays, which always seemed to be warm and sunny in those days, my mother and two or three of her friends who had daughters who were my friends, often had a “day out”.  We would walk across the fields, cross over Endway/Essex Way and make our way up onto the Downs heading towards the ruins of Hadleigh Castle.  At a certain point, known to us as “The Glade”, we walked down the hill and across more fields to the railway line.  No electric rails to worry about then and a clear view of the track in both directions so we were quite safe as we crossed it but I think we liked to feel it was “dangerous” as it added to the adventure!  From there it was a short distance to Benfleet Creek which, nearer to Hadleigh, was a quiet backwater, not the busy stretch of water it was by the station and the swing bridge across to Canvey Island.  Our mothers chatted while we played and built, not sand but mud castles if the tide was out.  Germs?  Yes, I’m sure there were but no one worried about such things then and, on the whole we were a healthy bunch of kids!

Sadly, for various reasons, I never kept in touch with any of my childhood friends but Faye Letts, Shirley Cushings, Pat Hepple are the names that spring to mind when I think of Benfleet.  Faye had an older sister and lived in, I think,  Thundersley Park Road, a road almost opposite the school.  Shirley lived at the other end of the village.  I think she was an only child but she had a cousin who was my brother’s friend – they went on cycling trips together.  Pat and her parents lived in Greenwood Avenue, a turning off St Mary’s Drive where I lived.  Faye, Pat and I all passed our Eleven Plus and went to Westcliff High School for Girls.  Shirley passed too but, for some reason, went to Southend High School rather than Westcliff High but we all travelled on the same bus every morning so our friendship remained intact for several years.

In the 4th photo on this page my friend, Faye Letts, is on the left with me just before I left home to start nursery nursing.

The 3rd photo is of me in uniform and was taken around 1954 after I started my training at a hospital in Kent.  My mother wanted to see what I looked like in uniform so I took it home with me on one of my visits. It was taken in the back garden of “Arcadia” in St Mary’s Drive – the square of concrete which was always grandly called “the terrace” was the base of our old air raid shelter.

As for me, when I started work at Dr Barnardo’s I “lived in” so, in effect, left home and only visited Benfleet after that until about two years later I moved to Kent where I met my husband.  Now, we live in Somerset but, as often happens, the older I get, the more I remember my childhood in Benfleet.  I wonder if anyone happens to remember me?

The 5th  photo on this page was sent in by Betty in reply to Denise Neale’s comment posted below. Betty has explained where the bungalow was in St Mary’s Drive.