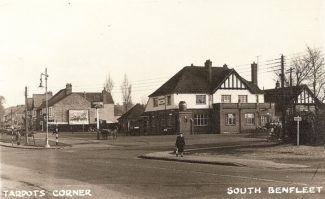 Saturday mornings was when my mother and I would join the family next door for our day out. Down to the Tarpots Corner and a bus into Westcliff by the playing fields and then a dancing lesson at Mimi Greens School of Dancing for Austin and I, tap dancing in our case. While Chrissie and Josie went on to the ballet class, very successfully for Chrissie.  Later when the family moved to Germany after the war, with their father being in the Army, Chrissie went on to join some ballet group called the Marquis de Quaver, where it was  talent that got her into the Corps and later on their return to England she joined the Saddlers Wells Ballet, despite being over height and becoming a principal dancer, I believe.

After class it was a walk into Southend Victoria and looking into the shops along the way.

I don’t think I will ever forget Austin dashing across the road at Hamlet Court Road and very nearly being hit by a car, no disc brakes in those days, he survived but was rather shaken for the rest of that day, possibly partly due the slap he got for having nearly got himself killed.

Once we got to Victoria  there was a quick visit to the underground toilets in the center of the Circus and then more roaming around the shops, remember Dixons and Keddies.

Then to the Gaumont for a sixpenny seat in the ‘Gods’, so high up that the films always seemed quite small, and all this on those hard wooden benches used as seating. After the films were finished it was all the way down the stairs and across the road to Percy Garons Tea House on the corner for afternoon tea and cakes. There Austin performed his unroll the Swiss Roll and hang it over the edge of the table and eat your way up the hanging strip trick. Mrs Bray quickly put a stop to that but we were young enough to have got away with it then.

Then it was the bus back home on the bus to Tarpots.  Two mums shepherding four tired kids back home to tea as it was then and on to bed to sleep rather soundly.

Next day up to mischief as usual I expect, and then after Sunday dinner off to Sunday School just up the hill before Croft Road. Run by the Salvation Army then, later it became a shopdwelling run by Mr Simpkins?

Austin and I had been passing the School one day and had sat down on the step for some reason and before long a gentleman had come out and offered us some cherries, we went every week after that but that was the only time we got cherries.

Looking back on those days you realize what carefree days they were for us, seemingly endless fields to roam over, numerous trees to climb and ponds, ideal for all sorts of adventures which always seemed to end up with at least one of us going home with wet feet and lots of mud, of course not all of which could be wiped off before getting home. Sunday tea and then to bed.  No TV then to keep us up, although none of us had watches in those days.  It crosses my mind that no matter where we were playing, it always packed up in time to go home and listen to “Dick Barton Special Agent” along with Jock and Snowy and as we got a bit older Valentine Dyle or Dial as the Man in Black.

Mondays it was back to school and next Saturday to look forward to, not sure about the tap dancing so much now.

Does anyone know the whereabouts of the Bray Family? I would love to catch up with them.