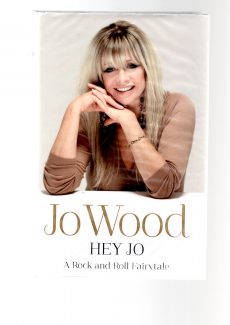 Josephine Karslake was born in 1955 and spent her formative years in Benfleet. The family lived in a 300 year old vicarage and in her autobiography “Hey Jo” she recounted the excitement felt on their first visit: “the house looked like a miniature castle, with gothic archways, church style windows and a pointed red tiled roof with high chimneys sticking up like candles on a birthday cake….. After years of dreaming I was a princess in a fairy tale, now I would live out that fantasy for real – and I certainly didn’t care that my castle was more Grimm brothers than Disney.”

“As its appearance suggested it was alive with history secrets and magic. The walls were built of stones from the ruins of Hadleigh Castle…and were three feet thick in places. There was even rumoured to be the body of a vicar under the doorstep, which was a huge lump of grey rock that certainly had the look of a gravestone.”

Her love of the place extended to the garden: “the house was surrounded by ancient trees, with thick low branches that looked like they had been put there for the sole purpose of climbing….I remember scaling the huge conker tree at the bottom of the drive and gazing out over Canvey Island, marvelling at how beautiful it was ….” the Karslake family were to occupy their castle from 1964 to 1986.

Her career as a model began with the help of local photographer and historian Robert Hallmann……their first success being a Daily Mirror quarter page photograph entitled Jo Karslake, 15, from Benfleet, Essex. After some unsolicited fan mail she chose the pen name Jo Howard and continued modelling until she was 22 .

Jo met Ronnie Wood of the Rolling Stones in 1977 and married him in 1985. They were  divorced in 2009, but Jo has kept his name. She has her own range of award winning beauty products – “Jo Wood Organics”; is involved in charity work; has a pop up restaurant called “Mrs Paisley’s lashings”; makes regular television appearances and is the author of a  book entitled “How to look and feel healthy, energetic and radiant the organic way.”