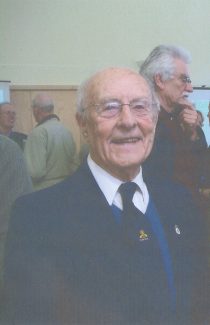 He became a frequent visitor to Benfleet and remembers the old ferry and cars getting stuck at low tide; the bridge that opened; the school in School Lane; a nest of adders on the Downs; swimming in the creek until it was banned; Church Creek when it flowed behind the church. Most embarrassing was attending a local dance with Iris and her friends in his first suit only to trip up near the lady barber’s and tear a hole in his trousers.

After the war Iris and Eddie bought the Homemadic Cafe in the High Street and asked Doris French to manage it …..thus Ron became an even more frequent visitor to Benfleet.