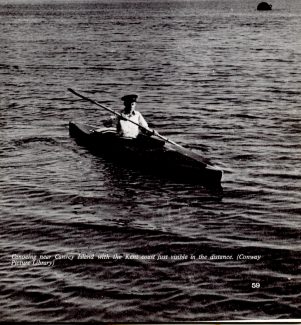 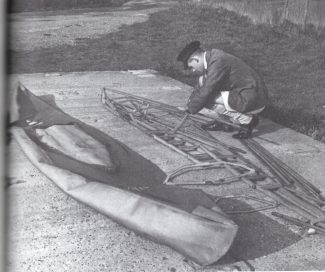 Noel McNaught, writing for the East Coast Digest in 1973, recounted his experiences of canoeing in the Thames estuary and in particular a night-time circumnavigation of Canvey Island just after the last war.  I was borne along like a bobbing cork…huge dark objects sometimes loomed up grotesquely: these were buoys, and not as I feared, drifting mines.

On reaching the eastern edge of the Island Noel waits for the tide to turn: at 4am I set off again….up the Hadleigh Ray I went, along Benfleet Creek to a suitable disembarking place, then walked home for breakfast.

On another adventure he narrowly avoids being run down by a gigantic tanker and takes refuge on a shipwreck: I scrambled up the sloping side of the wreck, hauling my boat from the water.  On his return journey he was intercepted by a police launch and told in no uncertain terms that landing on a wreck is strictly forbidden and that in this case was extremely dangerous…it being the ammunition ship Richard Montgomery.