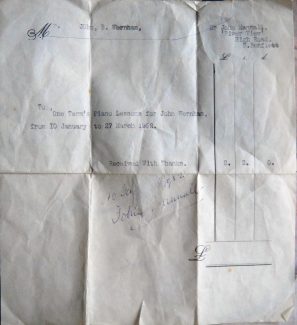 A recent contributor to our web site, Mr John Wernham, has supplied us with some information regarding a gentleman who lived in Benfleet High Road, who gave him piano lessons in the 1950s.

John has been able to supply us with one or two of his memories of this gentleman, but is keen to find out if anyone else remembers this man or perhaps has a photo of him.

In John’s own words.

“I used to have piano lessons with a Mr Mannall, whose son Alan, was a teacher at St Margaret’s C of E School in Bowers Gifford.  He lived in a very large house named “River View” halfway down the High Road in South Benfleet.  I stayed there with him many times at weekends, when my mother was ill and sadly could not look after me. I can never remember seeing the river, so where the name “River View” came from I do not know, as my bedroom was upstairs. What I do know is that Mr Mannall was a school governor of St Margaret’s School in Bowers Gifford, where his son Alan was a teacher.  At school I had to address him as “Mr Mannall” but at many of my weekend stays at his father’s home, I just called him Alan. Very confusing for an eight year old boy! I, like many others back then, were told to respect our elders and address them as Mr, Mrs or Miss.

Mr Mannall was a very clever, eccentric man, who always rode around South Benfleet on his very old bicycle, dressed in top hat and tails.  His home was full of antiques, as well as two Steinway concert grand pianos and one Beckstein upright piano. These pianos are the very best in the world and cost thousands of pounds. Sadly, his house is no longer there, it has been pulled down and new houses built on the land.

The last time I saw him was in 1966, still riding his antique 1908 bicycle and still dressed in his top hat and tails.”

Armed with this information, together with a copy of a receipt for piano lessons, we were able to find out a little more about this gentleman, whose full name according to the receipt was John Mannall.

The house “River View”, was given the number 463 in the 1950s, which enabled us to pin-point exactly where the property was.  This was backed up by some research showing that Mr Mannall appeared in the local telephone directory dated 1959, showing his address as 463 High Road (albeit his surname was incorrectly spelt as Manual). This means the house was between Cemetery Corner and Tarpots, just past Benfleet Horticultural Society premises on the west side of the High Road.

Did you have piano lessons with this gentleman or do you remember him riding his bicycle around South Benfleet?  If you do we would be very pleased to hear from you.