Queensberry Rules, but not in Benfleet OK 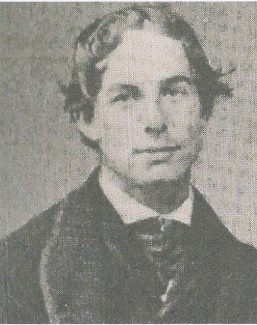 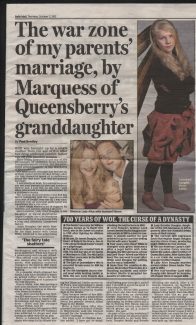 Not so when Percy Sholto Douglas, the 10th Marquis of Queensberry, “trashed” the Hoy in 1914.  A full account of the incident as reported in the Essex Newsman 1st August 1914 follows and is a wonderful example of restraint.  However a few snippets below will give you the flavour…coincidentally the Daily Mail 3/10/2013 reported on the current and past problems of the Queensberry family (full article follows on).

“Defendant turned the hotel into a scene of havoc”

“Ran down the High Street in the same scanty clothing, streaming with blood”

“He was all but naked, gesticulated wildly, and was rambling like a lunatic about his brother”

“It looked as though a pig had been killed”

MARQUIS AT THE HOY
AN EXPENSIVE NIGHT
DAMAGES £150

The extraordinary events recently at the Hoy Hotel, South Benfleet, by a nobleman, had a sequel on Wednesday at the Middlesex Sheriffs Court when the jury assessed the damages at £150 against the Marquis of Queensberry in respect of a claim for trespass and breach of contract made by John William Phillips and his wife, proprietor of the Hoy Hotel, South Benfleet.  Liability was admitted and the case was remitted from the High Court for assessment of damages.

Mr Frank Newbolt, for the plaintiff said the case arose out of most animated and extraordinary conduct on the part of the defendant.  It was unparalleled in the whole of counsel‘s experience.  By outrageous acts  the defendant turned their hotel into a scene of havoc.  Windows being shattered, doors burst open, furniture smashed and beds ruined.  On Monday, May 18th the Marquis arrived at the Hoy with a lady, who was understood to be his wife.

They appeared to be an ordinary married pair and had supper together, the Marquis, having 4 bottles of beer with his meal, they retired to their room early and the plaintiffs went to bed in another part of the house.  About 4am the Marquis dashed down the corridor practically naked, wearing nothing but a short vest and forced his way into Mr and Mrs Phillips’ room with such violence that a chair was hurled across the room into the wash-hand stand, the toilet set being smashed. Defendants’ conduct was that of a madman.  It was almost incredible.  He then rushed down the stairs shouting, bursting doors open as he went. He broke open the street door, put his fist through four billiard room windows and ran down the High Street in the same scanty clothing, streaming with blood.  Finally, having alarmed the neighbourhood, he was taken to Rochford workhouse infirmary, from which friends, more discreet than himself, removed him. The lady with him, who was not his wife, had not a shilling in her possession and the plaintiffs cared for her and sent her back to London at their own expense.  A friend of the Marquis sent them a £10 cheque, which was dishonoured.

Mr Newbolt added that Mrs Phillips’ health was broken and had to be sent away, while a daughter, into whose room the Marquis intruded practically nude suffered from nerves.  The hotel itself was brought into disrepute.  Defendant occupied a room with two beds in it, one of which he had  used and the other vacant.  When he came back into the house after his first pilgrimage into the street with blood on his hands, he got into the bed he had occupied and practically ruined it.  He then got into the other bed which had not been used.  Blood was also on the carpet.  After this he threw out of the window a toilet set smashing it to pieces and completely wrecked the bedroom.  Counsel read a telegram, dated May  16th which the Marquis sent to Mr Phillips:- “Hope and pray your wife and daughter better.  Any expense is mine.  Have given (naming a news agency) full particulars, please read tonight’s or tomorrow’s newspapers then you will forgive and accept aristocrat apologies.  Yours and others sporting behaviour credited in my statement”   –  Queensberry.

Mr Newbolt read a letter sent to the plaintiff by Mr Nastaky, the friend of the Marquis.  The letter read “I have stopped the cheque for £10 given by me to you as payment of your account, the charges in which I have since learnt are grossly incorrect.  Therefore as this cheque has been obtained from me under false pretences, I must ask you to immediately tender me a fully detailed account of every service rendered, and charge made by you, when I will go fully into the matter”.  Not a penny had been paid and the jury were now called together to assess the damages.

Mr Phillips giving evidence, said defendant who “did not look like a Marquis when he arrived” mentioned that he and the lady were going to Canvey Island and he arranged for a trap to be in readiness on the following morning.  Describing the early morning scene, witness said he was awaken by a lady screaming and the next moment his door flew open and the chair being sent across the room.  The Marquis, whose vest was tucked up so that he was all but naked, gesticulated wildly, and was rambling like a lunatic about his brother.  Witness could not understand what he was driving at and told him to get out of the room as witness would shoot him out.  Defendant then jumped down the stairs and smashed my phone, glasses, doors and windows.  Witness added that he could see he was practically “Up the pole“.

Mr Newbolt : I don’t think they like those expressions.

Plaintiff : That’s what we use in Essex.

The under-sheriff : You mean drunk?

Plaintiff : He only had four bottles at my house.

Plaintiff added that he awoke the staff and told them there was a madman in the house.  After he had paraded round the hotel three times, the marquis got to bed and after he had been there, and in the other empty bed, it looked as though a pig had been killed in the room.

What did he do then?  He came downstairs once or twice and went into the High Street with that short shirt on.  His body and arms were cut by the windows he had smashed and he was covered with blood.  Afterwards he threw furniture out of the window and a wash-hand basin narrowly missed Mrs Phillips’ head.  The Marquis then bolted into the street again in the same costume, and was ultimately restrained by a constable, who handcuffed him behind.  He refused to put on his clothes and it took three of us forcibly to dress him.

Plaintiff added, when the defendant told him he was a Marquis, he thought he meant he was an actor, something like those who took part in Karoo’s sketches.  He had a poker and if he had attempted to go for witnesses, well, he might have been there that day.

He has not paid your bill – not a half penny.

Why did you not stop him? – How would you like to get hold of a madman with no clothes on.  Plaintiff added that defendant had had apparently a bad attack of the “D.T.s ”.  No man in his sane mind would have acted as he did.

Mrs Phillips and a daughter, the latter aged 13, gave evidence as to the injury to their health and Dr Charles Grant said he saw Mrs Phillips in consequence of this occurrence.  On the morning after he found her trembling all over and scarcely able to move across the room.  She could not eat and suffered from insomnia.

P.C. Munk, South Benfleet, said on May 11th he received a call from the Hoy.  He had been on duty all night and was at home.  Defendant was taken to Rochford and put in the mental detention ward at the infirmary.

Mr  Nastaky, a Russian engineer, who described himself as a dear friend of the Marquis of Queensberry said he gave a £10 cheque to Mr Phillips because that was the sum demanded, but he stopped payment because he was told later that it did not cover the whole of the damages.  He wanted to help the Marquis because the latter was a bankrupt and had no money of his own.  If he had been asked to pay £20 he would have settled.  There was money standing to his credit at the bank.

Mr Viguy, for the defence, said the Marquis was obviously not responsible for his actions on the night in question.  He was inside the Court but had not been called to give evidence because of his nervous state.  The Marquis, who was an undischarged bankrupt, the worse while recovering  from the effects of drink.  He was not intoxicated, but mad.

Judgement was entered for the £150 with costs.