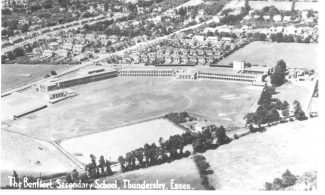 In 1938, the foundations of the school were dug and the building was started. Owing to the outbreak of war, building proceedings stopped and were not resumed until early 1948.

Various dates of opening were mentioned and after many postponements the school was finally opened today. Roughly one third of the school, the South Wing, was opened. The children, 170 in all were drawn from the contributory schools of Hadleigh, Thundersley, South Benfleet and New Thundersley.

The Staff were as follows:  Headmaster: A. J. Evans MA

Most of the day was spent in allotting places – cloakroom, dining room and classroom. All the preliminary work – the removal of all the equipment was done last week and the staff cooperated wholeheartedly in an attempt to get the school ready to receive the children.

Locally known as ‘The Palace’ while it was being built. However, during the emergency and to lift spirits, entertainments were arranged, including The Salvation Army band, the Palm Court Orchestra, Richard Attenborough, Ethel Revnell and Wilfred Pickles. The school nickname name was changed to ‘The Grand Hotel’.

The Benfleet Secondary Modern (as it was first known) was built on land once owned by William Bridge. The land formerly part of Cross Farm. The site was originally intended for a new primary school to replace the one in Church Road.  However due to the 1944 Education Act, which laid down that children aged 11 to 15 should be taught at a separate school and was designed to accommodate 900 pupils.

“Scott of the Antarctic” was being shown at the “Kingsway” Hadleigh. Most of the children accompanied by the staff went to the cinema.

No entry in logbook. Possibly a new book started and stored at County.