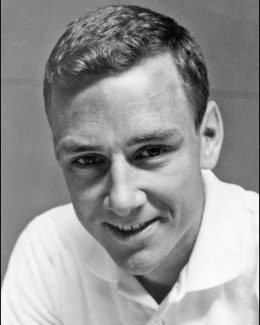 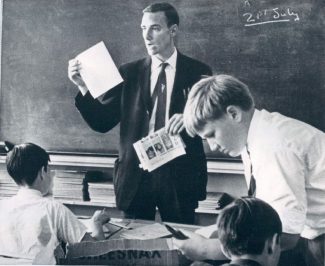 zoom
Buddy Edelen teaching a class at King John School, where he was known as 'the man who runs to work each morning'. The ten mile round trip being part of Buddy's 100 mile per week training schedule.
From an article in the Eugene Register-Guard newspaper 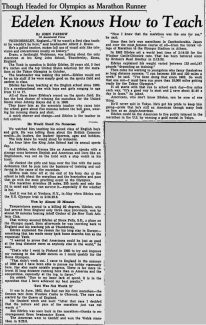 Leonard Graves (Buddy) Edelen was born in Harrodsburg, Kentucky in the United States in 1937. He was considered to be one of the greatest American runners that most people have never heard of. In the late 1950s he was emerging as a middle to long distance runner, at a time when there were few others in his home country excelling in this sport.

Training was difficult in the U.S. so in the 1960s he came to Britain, in fact to Essex and became a teacher at The King John School. Living locally, he trained daily under the long distance direction of his coach, Fred Wilt.

Though Headed for Olympics as Marathon Runner

Edelen Knows How to Teach

Thundersley, England – “If he wasn’t a first class teacher he wouldn’t be here” said headmaster Albert J. Evans. “He’s a gifted teacher, makes full use of visual aids like television and concentrates mostly on history.”

Evans, a forthright Welshman, was talking about the only American at his King John School, Thundersley, Essex, England.

The Yank in question is Buddy Edelen, 26 years old, 5 feet 9 inches and the top United States selection for the marathon at the Tokyo Olympics in October.

The headmaster was making this point – Edelen would not be on his staff if he were simply good on the sports field and useless in class. Edelen has been teaching at the English school since 1960. It’s a co-educational one with boys and girls ranging in age from 11 to 17.

All of them know Edelen’s record on the sports field.  He has the best chance of winning the marathon for the United States since Johnny Hayes did it in 1908.

They know him as the eccentric teacher who races into the school gates about five minutes before the bell goes, wearing his running shorts and shirt.

A quick shower and change – and Edelen is the teacher in full control.

He would stand no nonsense

We watched him teaching his mixed class of English boys and girls. He was telling them about the British Commonwealth – its leaders, the leaders’ interests, ages and hobbies.  The kids knew he would stand no nonsense.

An hour later the King John School had its annual sports day and Edelen, who dresses like an American, speaks with a strange cross between English and American and lives like an Englishman, was out on the field with a stop watch in his hand.

He clocked the girls and boys over the line with the same dedication that he puts into the business of training and suffering in the cause of the marathon.

Edelen took time off at the end of his busy day at the school to talk about the marathon and the heartaches and pain that go with the most gruelling event in the Olympics.

The marathon stretches 26 miles, 385 yards and only the fit in mind and body can survive it – especially if the weather is hot.

Temperatures soared to a killing 92 degrees.  Edelen, who had arrived from England only three days previously, won by almost 20 minutes beating Adolf Gruber of the New York Athletic Club.  That victory assured Edelen of Sious Falls, S.D., a place on the Olympic squad. Soon afterwards he was travelling back to England and his teaching job at Thundersley.

Edelen explained the reason for his long stay in Europe – something that has made many back home describe him as the expatriate Yank.”I wanted to prove that Americans could be just as good at the long distance races as anybody in the world,” he said. “That’s why I went to Finland in 1960 to try and improve my running in the 10,000 metres so I could qualify for the Rome Olympics.”

“That didn’t work out, I came to England in the summer of 1960 and I have been able to pursue my hobby vigorously here. I’ve also made notable progress.  There is far more interest in long distance running here than in America and the competition, especially at the top, is fierce.”  He added, “Due to my basic lack of speed.  It is in the marathon that I have achieved my best results.”

Just was not worth it

It was in June 1962 that Bud ran his first marathon – the famous race from Windsor Castle to Chiswick. The race was started by the Queen of England.

He finished ninth and said: “After that race I decided that the torture and pain of the marathon just was not worth it.”

But Edelen was soon back in the marathon – thanks to encouragement from Headmaster Evans. The American went to Cardiff and won the Welsh Marathon in 2:22:0.  “Now I knew the marathon was the one for me,” he said.

Since then he’s won marathons in Czechoslovakia, Japan, and over the most famous course of all – from the Greek village of Marathon to the Olympic Stadium in Athens.

Edelen explained his weight varied between 133 and 147 pounds “depending on training.”  Then came his warning to youngsters who fancy themselves as long distance runners. “I run between 100 and 120 miles a week.” he said. “I’ve been doing that since 1962. So work that one out – I must have run more than 10,000 miles getting ready for the Tokyo Olympics.

It all starts with that run to school each day – five miles each way. “It’s a good way to start and I save about $1.40 a day in fares.” he joked. Americans who don’t know Edelen can be sure of one thing. He’ll never quit in Tokyo. He’s got his pride to keep him going – pride that he’s still an American though many look on him as an Anglo-American.

Edelen could be the American to fire public interest in the marathon in the U.S. by winning a gold medal in Tokyo.

Leonard (Buddy) Edelen Jr., the first American marathoner in nearly four decades to set a world record, died of cancer in Tulsa, Okla., on Wednesday. He was 59.

Edelen cut 48 seconds off the world record when he won Britain’s Polytechnic Marathon, covering the 26 miles 385 yards in 2 hours 14 minutes 28 seconds on June 15, 1963. It was the first marathon record by an American since Albert Michelsen ran 2:29:02 in 1925. Afterward, Edelen was called ”America’s great hope” for a gold medal at the Summer Olympics in Tokyo in 1964. But a sciatic nerve condition caused him severe back pains, and he finished sixth. Edelen ran 13 more marathons, winning 7. He stopped competing at age 28.

In the four years leading up to the 1964 Olympics, Edelen made $120 a month teaching in a private school in England and lived in a one-room apartment with no telephone and no refrigerator. When he lacked the $650 needed to go to the United States for the 1964 Olympic trials, youngsters in a Y.M.C.A. in Sioux Falls, S.D. — the city where Edelen spent part of his childhood — raised the money through car washes, dances, basketball games and donations.

”I was about 13 years too early,” he said, reflecting on the money that became available to top marathoners. Edelen’s training habits also stood out in contrast with the austere regimens used by other runners. He drank beer nightly and smoked a cigarette occasionally, although he logged 130 miles a week. ”Think how good I might be if I didn’t have these vices,” he once mused.

As his running career was winding down, Edelen earned a master’s degree in psychology at Adams State College in Alamosa, Colo., and went on to teach psychology at the school. He later worked as a promotions coordinator for Pepsi-Cola Bottling Company in Tulsa and for the state Department of Human Services.

He is survived by his wife, Glenda; a son, Brent; four stepchildren, Yvonne Allen, Cindy Marsh, Teresa Waszut and Claudia Brashears, and 10 grandchildren.