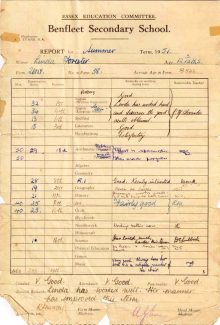 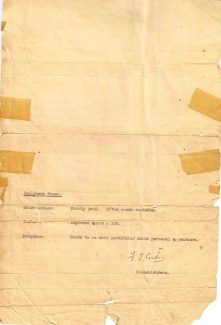 Linda Lee (nee Forester) a former resident of Benfleet, posted a comment on this site regarding her memories of life in Benfleet during the 1950s and in particular her days at the then Benfleet Secondary School, now known as The King John School.

Linda now lives in Western Australia but has supplied us with some other memories of her time spent in the U.K. Like most of us, time has taken its toll on the amount of detail that can be recalled but Linda hopes that there may be someone out there who can remember her and will be able to help with some more information.

In her own words:

I was schooled in Shipwrights Drive, at Benfleet Secondary School, then known as the biggest school in Essex, or so I was told. Surprisingly, it was only when I was in Western Australia and was talking to ‘just somebody’ while waiting in a queue, that I learned, as one does, that my old place of learning was now King John School.

Mr Evans (Headmaster) I remember very well. He was very strict and also he visited our little boarding house in Thundersley. In that way we got to know his son David and he came on various expeditions with us to the beaches at Leigh-on-Sea.  At one time be broke his little toe whilst doing all sorts of stuff on the beach.  I also knew Mrs Evans and she gave us some coupons to buy sweeties, as myself and another girl had done some little errand or other, she was a dear lady.

I recall that whilst attending the school, the school organisers were able to secure the amazing visit of Gladys Aylward. She was a British missionary to China whose story was told in the book, The Small Woman, by Alan Burgess, published in 1957. In 1958, the story was made into the film The Inn of the Sixth Happiness, starring Ingrid Bergman.  At the time her visit didn’t mean much to me but looking back I now appreciate the experience of meeting such an exceptional lady.

Referring to the Canvey Island floods and the amazing use of the school, good old Mr Evans, he came up trumps there, well he and all the other marvellous helpers and volunteers. Another boarder at ‘Runnymede House’ Marion, and myself, travelled to Canvey Island each Saturday morning for our piano lessons, with Mr Beddow (music teacher at Benfleet Secondary School).  This was around 1951/52, the date has to be correct as most of our school was taken by coach to ‘The Festival of Britain’. I digress, so when we arrived for our music lessons I remember Mrs Beddow would give us a lemonade and we would begin our lesson.  I think that Mr Beddow was newly married at this time.  I was also in the choir and I still have his dear handwriting on my school report “is a reliable member of the choir”. (See picture of Linda’s school report).

“…..when our school had finished the group song, we stopped but everyone else kept on singing.”

Next piece will be hard to believe, when under Mr Beddow’s direction we attended the South East Choir Festival and each school sang their chosen piece. One of ours was the ‘Hansel & Gretel Opera’. There was one song, that all the schools sang together, the title of which I cannot remember but when our school had finished the group song, we stopped but everyone else kept on singing. Oh dear! Next day Mr Beddow told us in disbelief, truly, that with this mandatory piece to teach us, he had neglected to turn the page so he hadn’t seen the last verse. Well, we all thought it was hilarious.  Now, as in most families these funny times are shared and passed down.  I expect that he told Mrs Beddow and maybe she told their children. In conclusion, I remember Mr Beddow as a good and kind man and a lovely gentleman.

Whilst attending the school I boarded at ‘Runnymede House’ Church Road, Thundersley.  To get to our boarding house from school, we would alight the bus, walk the length of Kenneth Road, past the little old Post Office, turn into Church Road  and between the church on the hill (St Peter’s), there we were, the old ex-army land units but very pleasant interior. Several teachers lived alongside us, Mrs Cordon and her daughter who lived way out in Bucks, and Miss Elliot a P.E. teacher.

There were quite a lot of us young girls housed there for one reason or another. Most of our mums had died or some had family issues but we all had a great time in lovely surroundings.  Prettily decorated dormitory and a great Common Room.  We received the best of care from the teachers who lived alongside us but also taught at our school. The surrounding area was mostly countryside, although we were allowed to travel by bus to Rayleigh to visit the cinema with our pocket money.

I left the school aged 13 in 1952, as my father had re-married and the fees, whatever they were, could not be paid, so back to Dagenham and into a local school.  I was literally ‘whisked away’ one evening back ‘home’ due to said fees looming.  I never had any opportunity to collect addresses, like you do, although Jane Beecham wrote to me once saying we could write to each other in ‘shorthand’, silly yes, but some of us learned that mode of business years ago.

In 1962 I actually returned to Kenneth Road, as one young lady who worked alongside me in our London Office of Vivian Gray Stockbrokers, had taken ill and my boss asked me to take her home.  Good Lord, what a shock, when I discovered that she lived in a new house (built by her father) just opposite Kenneth Road, Thundersley but sadly there was no time for me to visit Church Road etc, I had to return to Rayleigh Station to be homeward bound to Dagenham. So, if this young lady reads this, I would love to hear from her.