King John School - My Memories of the Early 1950s 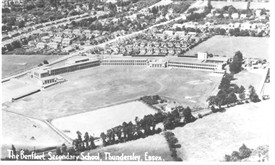 I was in Mr Bailey’s class 1954/1955. He was the English teacher and a friend and I contacted him about 20 years ago, he had moved from Benfleet to somewhere in the Midlands. We wrote to him and he was kind enough to reply.

Miss Boon was Deputy Head and we used to refer to her as Wiggy, as her hair was always combed into exactly the same tight wavy set!

Miss Elliot took PE.  Mr Ellison was the history teacher and I think he lived in Badger Hall Way.

Mr Ward had left before I started school there and I used to play with his daughter, Kaye. I believe he went to Wickford School where he was Headmaster.

Mr Beddow was the music teacher, but his band was not formed when I was attending the school.

The swimming pool was not built at the time.

A few years ago, I went to view a bungalow in Hadleigh and realised it had been the home of Mr Evans, former Headmaster, as there were a lot of photos on view  which were taken of him and his wife in their earlier years. It brought back a lot of memories.