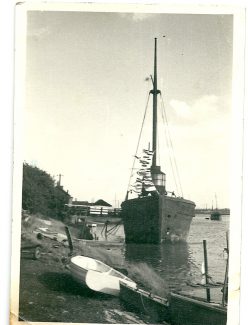 zoom
The Innerdowsing, an old Trinity Light house boat the 3rd and last boat to be home to the Benfleet Yacht club
Paddy Marrison 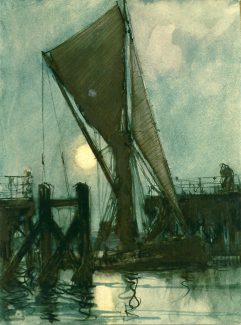 zoom
Thames barge by moonlight going through the bridge at Benfleet Creek. Watercolour by Edward Wigful June 1933
Reproduced with the permission of Paddy Marrison 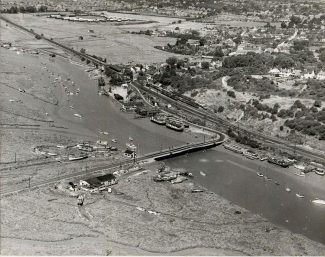 zoom
Aerial view of Benfleet Creek taken in 1948, the yacht club at this time can be seen moored close to the railway station. The bridge across the creek opened to allow boats to go out into the Thames Estuary

The Benfleet Yacht Club was started in 1922 with meetings held in the Hoy Public House.

By 1927 an old Thames barge had been turned into the clubhouse.

In 1935 the Benfleet Yacht Club acquired an ex–Gravesend Port Authority health ship “Hygeia”, for their headquarters.  It had originally been a two masted schooner moored off Gravesend, however this boat was not built to be grounded on the mud with each tide and she quickly began to leak and electric pumps had to be installed to combat this.

Can you name any of these faces? please help click here.

The “Hygeia” was replaced by the ex-inner Dowsing Lightship in 1946; she was built in 1840 and was the oldest surviving lightship afloat, this was moored just by the station. A great deal of work was needed to convert her to a clubhouse, but this was all done by members. “The toilet was a little shed on the deck with a hole direct to the creek.  There was a large cast iron stove in the middle of the main saloon and here social functions were held.” (Eric Kemp)  Small boats would be pulled up onto the banks of the creek in front of the station and under the railway bridge.

The Boats gained access to Benfleet Creek by opening the bridge to Canvey Island, at this time boats had priority over road traffic.  As the population of CanveyIsland greatly increased in the 1950’s a non-opening bridge was constructed over the creek and the clubship was moved to moorings east of the bridge.

In 1984 the present permanent clubhouse was built on Canvey saltings on the South side of the creek.

Yachting for pleasure was theoretically banned during the war years however due to the foresight of one member who lived near Benfleet station, Mr Bert Wines who offered to open the club as and when needed thereby keeping it running.  During the war there was a fairly large military and naval presence in the area.  Holehaven was the HQ of the Admiralty Thames Patrol.  The Commodore invited the senior staff of these organisations to become honorary members of the club, this “helped to keep the club running as the bar did very well.”