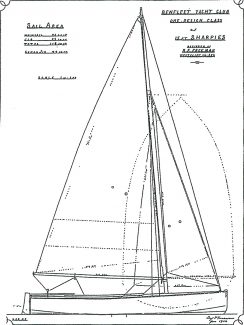 In 1936 the Benfleet Yacht Club asked Reg Freeman, Who was a yacht designer and member of the Leigh Sailing club, to submit proposals for a sailing dinghy to sail and race in Benfleet Creek.  The proposed design was accepted and the design became the property of Benfleet Yacht Club. The original plans were submitted by Reg Freeman in ink on cartridge paper, and the boat was known as BOD’s, the Benfleet One design.

About twelve were built at the Benfleet boat yard of CC Underwood and were raced and sailed until 1939.  The Maylandsea Bay Yacht club were licensed to build a fleet which became known as MBOD’s.

The design was ahead of its time as hard chine sailing dinghies were fairly rear at this time and did not become popular until the late 1940’s with the GP14 and the Wayfarer, etc.  Attempts were made in the late 1040’s to build them in modern materials but the design was planked with complex curves and plywood will only bend in conical curves, no more have been built.

Benfleet Yacht Club intends to put the original drawing on display in the clubhouse.