Two articles in the Southend Times for October 1928 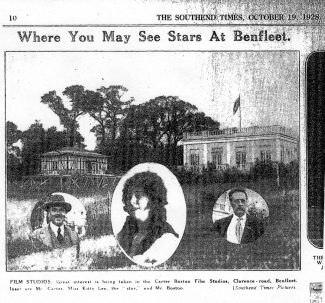 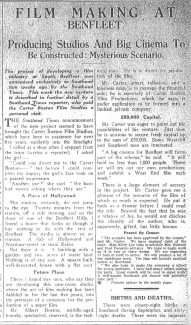 These two articles are from the Southend Times and describe the setting up of the studio. The first is from the Friday 5th October 1928 edition.

Benfleet is to have a new industry (writes our correspondent in the district). At a meeting of the local Chamber of Trade, on Tuesday, it was revealed that the Carter Boston Film Producing Company intends to open up and operate the film producing studios in its grounds at Benfleet.

A letter, which was read to the meeting, asked the co-operation of the Chamber in promoting this new industry in Benfleet. The letter was favourably received and the secretary of the Chamber of Trade has now been instructed to write to the company to discuss more fully the way in which mutual assistance can be rendered.

This second article follows up on this statement when reporter paid a visit. It appeared in the Friday 19th October 1928 edition.

Producing Studios and Big Cinema to be constructed: Mysterious Scenario.

The project of developing a film industry at South Benfleet was announced exclusively in Southend two weeks ago by the Southend Times. This week the new venture is described in further detail by a Southend Times reporter, who paid the Carter Boston Film Studios a personal visit.

The Southend Times announcement of the new project seemed to have brought the Carter Boston Film Studios, which have been in existence for over five years, suddenly into the limelight.

I called at a shop after I stepped from the train (writes a reporter). I asked the girl:

“Could you direct me to the Carter Boston —“ but before I could complete my inquiry the girl’s face took on a pained expression.

“Another one!” she said. “We have had scores asking where they are.”

A Piece of Hollywood

The studios certainly do not jump to the eye. Twenty minutes from the station, off a side turning, and on the slope of one of the Benfleet Hills, I found a house that looks as though it has nothing to do with the rest of Benfleet. The studio is almost an intrusion. A dab of Hollywood and Wardour Street in rural Essex.

But there it is. A building with a garden and two acres of waste land. Nothing is of any size. A square built, well decorated house with a flat roof.

There I found two men, who say they are developing this one room studio, where the art of film making has been dabbled in for the last five years, into the premises for the production of a super film.

Mr Albert Boston, a middle aged homely, spectacled, reserved, is the technical man. He is to direct the production of the film.

Mr Carter, smart, talkative, and a business man, is to manage the financial side; he is secretary of Carter Boston Film Productions, which he says is under application to be formed into a limited private company.

Mr Carter was eager to point out the possibilities of his venture. Just now he is anxious to secure fresh capital up to the sum of £50,000. Some Westcliff and Southend men are interested.

“A big cinema for Benfleet will form part of the scheme,” he said. “It will hold no less than a 1,000 people. There we will try out our own productions and exhibit a West End film each week,”

There is a large element of secrecy in the project. Mr Carter gave me a glimpse of the scenario of the film of which so much is expected. He put it back in a drawer before I could read the title. Beyond the fact the he was a relative of his, he would not disclose the identity of the author, who is, apparently, gifted, but little known.

“The scenario has been approved by the censor,” said Mr Carter. “We have engaged eight of the cast. Miss Kitty Lee (who is actually Mrs Boston) and Fred Decastro will star. We hope to begin work on it in two or three weeks. We are expecting 17 tons of stuff to arrive. We will produce a lot of less ambitious work. The film will include nautical scenes of Southend.

“We also hope to make the company a school for young aspirants. I have had many callers asking for parts. Local crowds will be used in super work. A well known Southend girl dancer will probably take part.”