You are here: HomenextBrowse ArticlesnextSports and LeisurenextFilm Studios and CinemasnextThe little old lady who said "no" to fame is dead

The little old lady who said "no" to fame is dead

Report of Kitty Lee's death in the Evening Echo 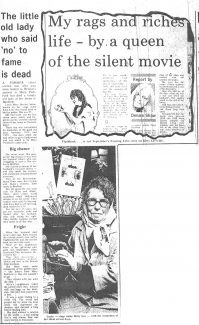 This article appeared in the Evening Echo for Friday 19th May 1972 on page 10. This article is based on the article published on the 29th September 1971. This is the obituary I have been searching for since starting on the film studio research. My thanks to Elaine Worster for pointing me in the direction of the correct newspaper.

A former silent screen star who was once hailed as Britain’s answer to Mary Pickford has died a lonely old lady at her home in Benfleet. Lucia Mary Boston, better known by her stage name Kitty Lee, was found dead in bed by police. She was 83.

She had lived out her last seven years, lonely and forgotten, in one souvenir cluttered room of her home in Clarence Road. There she was surrounded by memories of the good old days between 1919 and 1929 . . . the days when she had offers to go to Hollywood and was asked to be Mary Pickford’s understudy.

She never went. She gave up her big chance to stay with her husband Albert, who was struggling to start a film studio in Benfleet.

She starred in dozens of her husband’s two-reel silents – and also made the scenery and comforted temperamental actresses.

Two of her best remembered films were East Lynne and Dante’s Inferno, both made in Benfleet.

But the good life was soon over for Kitty and Albert. Their silent screen world crumbled when Hollywood moved in on the scene. Their studios were sold for housing. And Kitty had to sell her long dark tresses for £14.

For the next 25 years she put her memories aside and looked after her husband, who was losing his sight. They hardly stepped outside their home in all that time.

When her husband died seven years ago, Kitty braved the outside world – but traffic frightened her and she moved back into her little room.

None of her neighbours knew of her glittering past until last September, when Southend film historians discovered her. They also discovered a wealth of priceless archives which are now in the British Film Institute.

But there were some mementos of her golden days – like letters from Mary Pickford – that she wouldn’t let go. They stayed with here until she died.

Kitty’s neighbours called the police when they noticed milk and eggs on her doorstep. She had died peacefully in bed.

It was a quiet ending to a silent life. The world had passed her by since the days when she captivated audiences and dazzled a long line of leading men. She died without a relative in the world – a sad ending for a star whose face was once known to thousands.