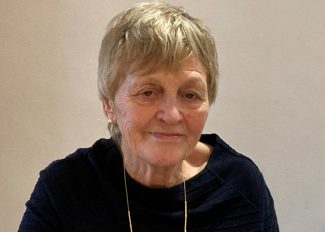 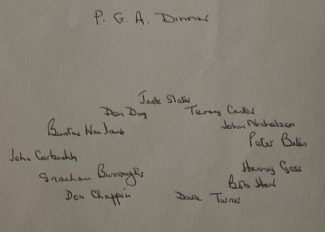 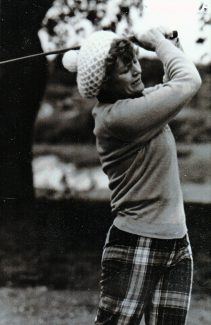 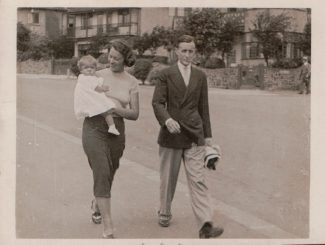 zoom
Marjorie and Kenneth Preston, Jill's parents. Marjorie holding Jill as they walk down Chalkwell Avenue on their way to the beach. Mid 1930s.
Jill Hair 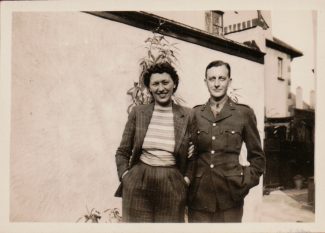 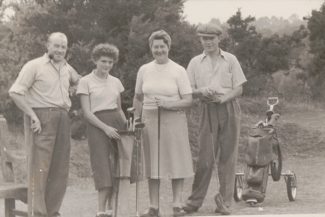 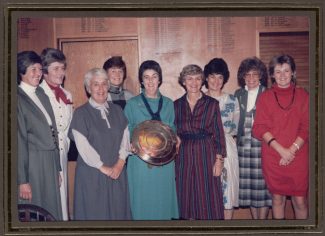 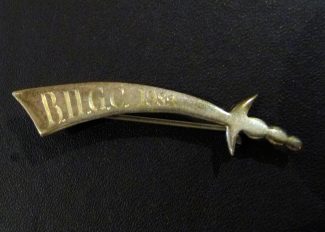 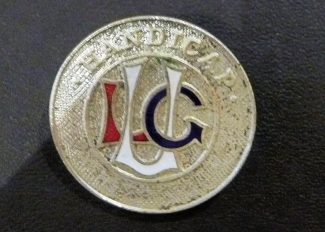 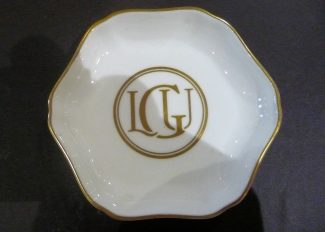 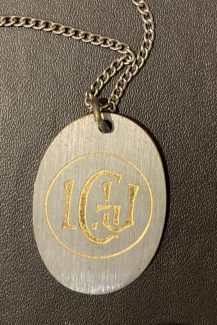 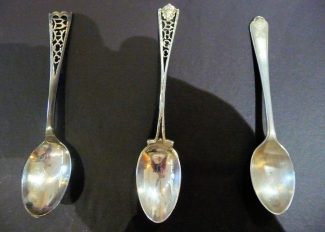 zoom
Jill won many silver teaspoons over the years but as with many households some have disappeared over time.
Jill Hair

In 2022 Boyce Hill Golf Club celebrates its centenary. Jill Hair has been a member of the club for over 70 years and recalls some of her memories during this time.

My father and mother, Kenneth and Marjorie Preston were both members of the Club before the war.  My mother was a very keen player, she was the best player in the club at the time and my father was on the Board.

Ernie Hick was the Chairman at that time and I think they were all involved in trying to get the Club back open again. The clubhouse had been bombed and then struck by lightning and my husband, Bob, who at that time wasn’t my husband, it was before we got married, helped to get the war damage repaired. I believe they received £14,000 for the repairs. He worked for the district valuer who was a surveyor and he helped get the war damage money through to put up the new clubhouse. In the meantime, the club had temporary buildings at the top of the hill.

I believe my membership started in 1949 when I was fifteen, I was at school at that time. The people who were in at the beginning were the Carters, we’ve got cups from them, they were part of the original people. My parents didn’t join in 1922, they were more the 1930s, but the Carters and the Hicks it was,  and the other ones were the Turners. I do remember Mrs Turner, she used to come up here but she didn’t play golf any more but her son played golf.

I can remember coming up here when I was a tot and going into the old clubhouse. I can also remember being picked up by someone to pick a mulberry off the mulberry tree, which is still there today albeit half of it was destroyed by wind, I think. I shouldn’t think my mother was very thrilled because they’re very juicy and messy.  Another memory is sitting in the lounge and thinking they’ve put out little cheesy biscuits, how sophisticated.

Afterwards, when the Club re-opened, we were always allowed out with a cut off club and were chipping away.  My interest in golf was because my mother was very keen and so she was very keen for me to play, so I had lessons with Ernie Barker, the pro at the time and then he got me started and that’s where it started really.

As far as lady members are concerned, it was quite a low membership to start with and then it increased quite a lot and I think perhaps in recent times it has decreased somewhat but recently we have had an influx of younger members. But it’s obviously fluctuated over the years.

The dress code for the clubhouse has definitely changed.  No member was allowed in without a collar and tie, I know that and in fact they didn’t allow a lot of people into the bar, the pros weren’t allowed into the bar. No, they weren’t and they were quite strict.  On the course there wasn’t really a dress code because you didn’t have all the golf clothes in those days, you had whatever was comfortable for you to wear. Slowly all the pro stuff and getting these special jumpers with a name on meant gradually golf clothes became separate to normal clothes.  But really, in those days, at the end of the war, you had clothes rationing and you didn’t find clothes very often, you had to make do with what you had.  So, it was really adapting what you had to, so it wasn’t too tight a skirt to climb up the hills and that sort of thing.

I was the captain in 1971 and in those days, we used to have Pro Ams and we had some really well-known people playing in them. Ken Brown you know, he does commentary on a lot of things. Danny Blanchflower was here, I think there was another world cup footballer who used to come too. We got really very good people come down. Yes, and it was very interesting.

A memorable moment happened one Tuesday when an aeroplane landed on the 14th and there was great excitement, I wasn’t around at the time but one lady got very excited. I don’t know what it was about but I think it was a light aircraft.

Today, this building has all changed, the clubhouse as it originally was, was quite small and it’s had extension after extension.   The lounge has been extended and that’s only fairly recently.  The view from the lounge is beautiful. There are not many places you can sit and look at a view like this.