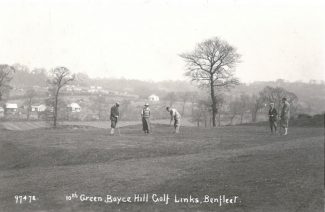 In 2022 Boyce Hill Golf & Country Club is celebrating its Centenary.

The club was originally set up as a ‘Company Limited by Shares’.

The  formation of the club is described below.  This information has been extracted from the Club’s history on their website, which was written by Ian Tickell in May 2000.

The early days of Boyce Hill Golf Club in South Benfleet are closely tied with Leigh Park Golf Club, a club certainly in existence during the 1914-1918 war and also for a few years following. The clubhouse of Leigh Park in 1921 was situated at Belfairs Farm, a building still in existence to the west of Eastwood Road, Leigh-on-Sea, and near to the present 4th Tee at Belfairs Park Golf Course. Due to the re-numbering of the holes at Belfairs in more recent years, it has become the 11th Tee to the many golfers who started their golfing careers on these fairways.

Now Southend’s municipal golf course, with the farmhouse known as the “Greenkeeper’s Cottage”, the course at Leigh Park, which one must assume was of only nine holes, was built on the land bounded to the north by the roadway to Belfairs Farm, to the east by Eastwood Road, to the west by Belfairs Woods and Leigh Park Farm and to the south by the Leigh brickfields, now Belfairs School, and by Bailey Road and the London Road.

…..so eyes were cast around to find suitable land that could be converted into a quality golf course.

The golf professional at Leigh Park at this time was one Ernest Barker, who had replaced Ernest Gray, an original member of the Professional Golfers Association when it was founded in 1902 and Leigh Park professional from 1915 to 1917, eventually to become the professional from 1923 at Bowers Gifford Golf Club, situated between Benfleet and Pitsea. Certain of the members of Leigh Park were dissatisfied with both the golfing conditions available and also the news that the estate within which lay their golf club was soon to be compulsorily purchased by the Southend Council, so eyes were cast around to find suitable land that could be converted into a quality golf course.

A letter dated 23rd October 1921, headed Leigh Park Golf Club, Belfairs Farm, Leigh-on-Sea, Essex, to a Mr. Cooper suggests plans for some members of the Leigh Park committee, including a Mr. Littler, to walk over the fields of Boyce Hill Farm, South Benfleet, to assess its suitability as a golf course.

Legal Indentures and Deeds exist back to 1802 regarding the farm, known originally as “Boyce’s”, including an Indenture dated December 31st. 1868, which mentions that the Incumbent of the Vicarage has the right to use the well on Boyce Hill Farm at a charge of ten shillings per annum, a first mention of the name “Boyce Hill “. In the next few months, a group of members from Leigh Park Golf Club formed a company “Boyce Hill Golf and Country Club Limited” with the avowed interest of renting the land at Boyce Hill Farm for conversion to a golf course.

The first meeting of Boyce Hill Golf and Country Club Limited took place on 3rd August, 1922 at Gordon Hall, Pall Mall, Leigh-on-Sea, a hall adjoining the present day United Reformed Church at the corner of Leigh Hall Road and Pall Mall. At this meeting, chaired by Montague Jackson, with three other directors present, Messrs. Littler, Edwards and Dafforn, it was agreed that Leigh Park Golf Club was not to be purchased and that Boyce Hill Farm at South Benfleet, comprising 119 acres, was to be leased to the Company for a term of 99 years, at a premium of £1,250 and a rental of £200 per annum with certain options to purchase within a prescribed period.

Things appear to have moved quickly, in August 1922, regarding Boyce Hill Farm. An agreement for a lease dated 27th August 1922, between Messrs. M. L. Jackson and H. W. Littler, as Trustees for the Company, and the Landlord, was superseded by a conveyance, dated 31st August, 1922, of the Freehold Farm and Lands known as Boyce Hill Farm, South Benfleet, to Mr. M. L. Jackson. Boyce Hill Farm was leased by Boyce Hill Golf & Country Club Limited from Montague Jackson at a rental of £200 per annum, together with the option to purchase within 21 years, from the commencement of the term, at a price of £2,900.

The land was thus acquired, comprising 120 acres of hills and dales, with grand views over the rolling hills of Thundersley……..

The land was thus acquired, comprising 120 acres of hills and dales, with grand views over the rolling hills of Thundersley to the north and west, Thundersley Glen to the east, and the River Thames, together with the quiet villages of Benfleet and the adjoining Canvey Island to the south. In the early twenties, motor cars were at a premium, so the reasonably accessible station at Benfleet on the London, Tilbury and Southend Railway was an asset to those travelling from the east and west. Quoted in an early Boyce Hill Golf Club handbook as a “leisurely amble through the country churchyard and by a winding path up Vicarage Hill” one can feel sorry for the arriving golfer, with his golf bag on his back and his other hand luggage, walking rather breathlessly to the first tee after his “leisurely amble” up from the station.

The popular golf professional at Rochford Hundred Golf Club, the oldest golf club in the Southend area, one F. G. Steel, known to all and sundry as “Joe”, was quickly called upon to walk over the land and lay out a golf course. Within days labourers and greens staff were cutting out fairways using horse-drawn mowers and denoting greens, but at that time no sand bunkers, that would enable the first nine holes to be “played” over on the formal opening day of 1st October, 1922, only thirty days after the acquisition of the land by Montague Jackson!

By the end of 1922 Boyce Hill Golf Club was on the road, a course designed with nine holes laid out in a basic fashion and the other nine holes on their way. The Directors had great plans for the future, including a dormy house, tennis courts and a bowling green , in all to match their organisation’s title “Boyce Hill Golf and Country Club Limited”. In those early days drawings had been completed for an elegant clubhouse but for the time being the original Boyce Hill Farmhouse was used as a temporary clubhouse, with the usual amenities that one would expect. At an Extra-ordinary General Meeting held on 24th August, 1923 , at the Grand Hotel, Leigh on Sea, it was agreed to raise a mortgage of £4,000 with the National, Provincial & Union Bank and to purchase the freehold of Boyce Hill Farm from Montague Jackson.