Flower Shows Over The Years 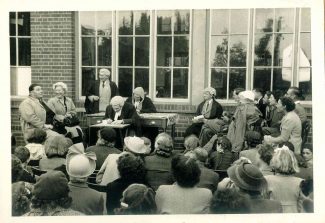 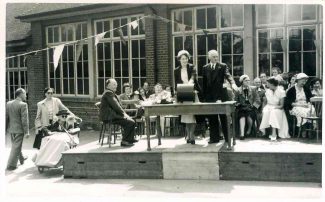 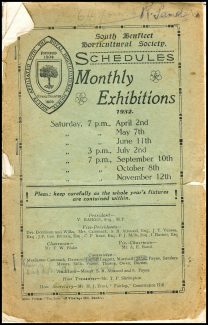 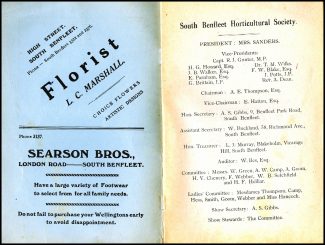 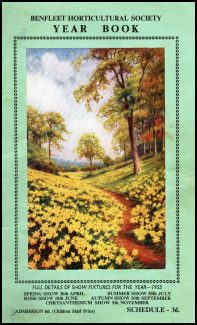 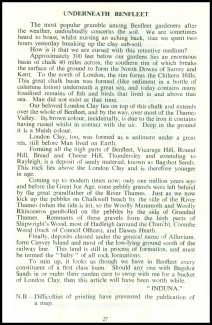 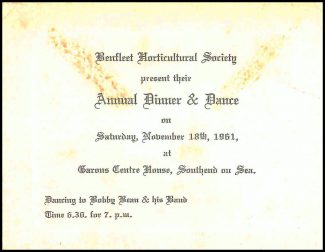 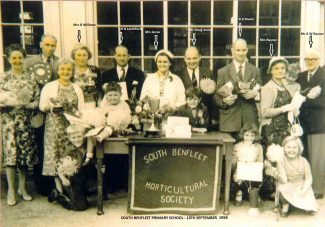 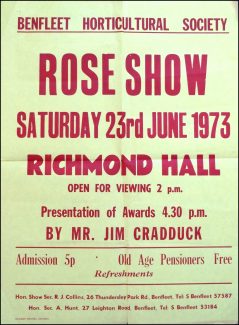 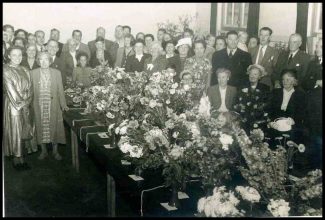 Our first show was held on August 28th 1920 on the Anchor Meadow at the side of the Anchor Inn.  The horticultural exhibits were displayed in a marquee and the Show was part of the village fête organised by the Society. The practice of having the Summer show as part of a fête was continued up to the outbreak of World War II and then after the war up to 1952.

In 1923 we affiliated to the Royal Horticultural Society (fee one guinea) and awarded a Banksian Medal, won by Mr R. Hall. The practice of having sports and a fair at Shows was discontinued, so as not to pay entertainment tax. A Society bank account was opened with London Joint City and Midland Bank.

In 1924 the shows were increased to two a year and the shows remained open until 8-9pm to allow late workers and those travelling back from London to see the shows.  This year also saw our first show trophies which were presented by members of the Society.

All three cups were eventually won by a person three years running and became their property.  The Perry and Renvoiz cups were both won by Mrs Cammack and were eventually returned to the Society after the death of both Mrs and Mr Cammack, the latter in 1949.

In 1926 we affiliated to the Rose Society.  The Show venue was transferred to the then new, Hopes Green Council School, where it remained until 1958, when the hiring out of Schools for social functions was discontinued.

In 1928 monthly social evenings commenced at the School which usually included a small horticultural show of about 15—20 classes, talks, lectures and whist drives.  Monthly meetings continued to the outbreak of war but were not restarted after the Society reformed in 1946.

…classes for home made honey, Economy cooking, cage birds, Goats, rabbits and one childrens’ class was for the largest number of white butterflies in a jam jar.

After the Society reformed at a General Meeting held on Tuesday 21st May 1946 in the Methodist Hall at the Tarpots, the shows were increased to four (the 5th the Spring show was added in 1955).  The Summer Show was by far the largest and as pre-war combined with other attractions.

The Show classes reflected the continuing rural aspect of Benfleet.  There were classes for home made honey, Economy cooking, cage birds, Goats, rabbits and one childrens’ class was for the largest number of white butterflies in a jam jar.

The Show Schedules now contained a large number of adverts from local tradesmen.  In 1948 Searson’s advert advised you to be sure to order your Wellingtons—many side roads of Benfleet were still not made up and muddy in winter.  Many classes were not sponsored; one show in 1949 had Unwins Seeds, May & Baker and Murphy Chemicals supporting.  There were 105 show classes; 74 adverts in the Show schedule, and prizes including 3 medals, a number of certificates and 15 sponsored awards.

The 1952 Summer and fête show was held on the 2nd and 4th August at Hopes Green School and adjoining grounds.,  It had 166 classes (24 for children) and among the attractions were a Benfleet Flitch trial, various side shows, a concert, tilting the bucket, greasy pole, gents ankle competition, childrens’ races, dancing, refreshments, auction and, as the Show Schedule said “also all the fun of the fair”.

The show was insured against rain for £300.  In fact it did rain heavily and the insurance money was collected but only because the nearest official rain gauge was at Southend where it rained more than at Benfleet and the gauge showed over the stipulated measure.

1952 also saw the issue of our first Year Book, as distinct from individual Show Schedules, and by this time we were affiliated to the RHS; NRS; NCS and the NDS.  The 1955 Year Book had a coloured picture pasted to the front cover and this continued until 1966 when it was considered too expensive to continue.

‘We are sometimes heard to boast, whilst nursing an aching back, that we spent two hours yesterday breaking up the clay sub-soil.’

When the fête part of the Show was finally dropped from our Shows, many non-horticultural classes also ceased and for some time the number of classes for each show were fairly small—40 for Spring and 50 odd for Summer.  In recent years as Shows have become more specialised with many additional flower cultivars, a much wider selection of bulbs, the addition of pot plants, greenhouse grown plants and produce, handicraft, wines and Floral Art, the classes have increased to the present day 80 to 100.

It was agreed that individual advisory committees would cease and the Society’s affairs be run by a General Committee and Executive Officers.  The Committee would meet every second Wednesday in the month at the Elderly Peoples Clubhouse, Green Road.  In 1973 the meeting day was changed to Thursday and finally in 1975 the meeting place was changed to South Benfleet Community Hall.

The Floral Art Group was formed in 1960 by Ms Murrey, Reed and Rayner.  Up to 1971 it was called Decorative Arrangement when it was changed to Floral Art.  In 1962 they were represented on our Committee and in 1963 held their first show.

In 1955 Mrs Ruby Sanders presented a shield to be competed for each year in a small separate competition to be held at each Society’s show venue in turn.  The competition ran from 1955 to 1975 with Benfleet, Rayleigh, Canvey, Wickford and Ramsden Bellhouse taking part.  The competition finally ceased in 1975 due to lack of interest as Societies dropped out, one by one, and the Shield was returned to the presenter. Although Benfleet won the first year, they only won once more.  Canvey won 10 times and Rayleigh 8.

In 1970 Castle Point Council began a yearly flower show, organised by the local Horticultural and Gardening Associations and Societies.  For the 1975 show, Mr C H Boreham of Benfleet Horticultural Society presented a shield for an intersociety competition, the winner being the Society gaining the most points over the whole Show.  Up to date Benfleet Horticultural Society has been more successful than with the Sanders Shield and have won it many times.  The Show was discontinued after the 1991 show due to financial restrictions by the new Borough Council.  In 1994 the Society held a mini show at The Town Show W/side.

Allotments of the District

The following year, for a reason not known, it was changed to five miles radius of Tarpots Corner.  In 1956 membership area was enlarged to all of Benfleet Urban District Council and, finally, in 1965 opened to all.

From the formation of the Society and up to the outbreak of the war in 1939, Show prizes were usually presented at a dance or whist drive held on Show Day evening or one day the following week.

As far as it can be gathered from existing records of knowledge, a formal Dinner and Dance was started around 1955/56.  Various venues were used, Garons in Southend, the Middleton Hotel, West Cliff Hotel and the Tarpots.

Our first Horticultural Talk was given by Mr Easlea at the Benfleet Hall in March 1923 and the following year a Miss Mongredieu gave a talk on Herbaceous Plants, about 70 people attended. Since the war a wide selection of talks and lectures have been held at least twice a year but of late, unfortunately, have been poorly attended.

Our  first organised  outing was in 1927 to Lord  Lambourne’s Estate.   The  Committee travelled by charabanc at 4s 6d per head.  Over the years the Society have visited a wide range of gardens and other places of horticultural interest, Kew Gardens and Wisley remaining popular over the years.  With the continuing improvement of the road network and motorways, it has been possible to go further afield on a one day coach outing.

In 1994 we started a monthly Club Night with various speakers in the W.R.V.S.

See Part I and  Part III