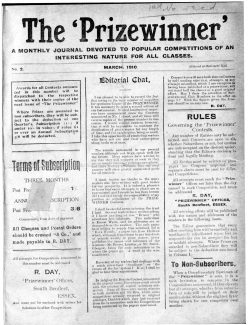 zoom
R. Day of Benfleet was the editor

This relates to the second issue of a magazine devoted to the world of competitions…a forerunner to today’s titles on the subject such as “Competition Magazine”. How long it lasted I do not know, but Benfleet was where it started. I like the way the editor, R. Day manages in his editorial to cast doubt on the reputation of his competitors, while talking up his own product. Nothing changes …

The date of publication is 1910 and the reference to “all classes” indicates that the class system was still well entrenched. After the first world war it would be a different matter. The address is also illuminating… the lack of a house name or number seems to confirm that Benfleet was still a small place and/or that postmen knew their area well.