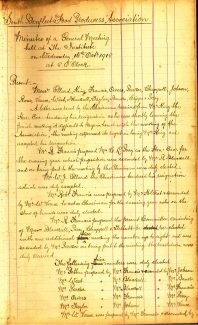 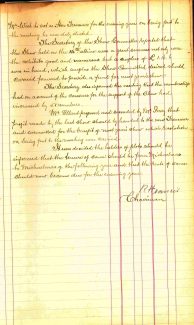 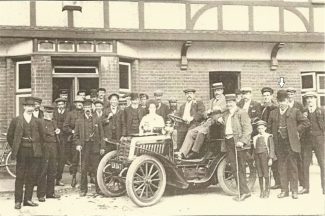 zoom
The gentleman (marked with an arrow) on the right of this picture is Mr R. Francis, the first Chairman of The Society in 1920. May Land is in the white blouse. The driver is Mr Jones from Hadleigh woodyard. 4th from left is Kiff Layzell. 12th from left is Dick Alderton. Extreme right is Fred Knightley and the young lad is Fred Killingback. 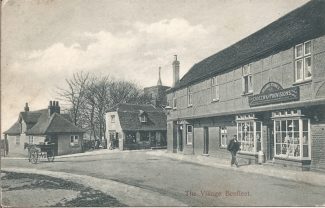 zoom
The Village Institute and The Anchor Inn. Date unknown. 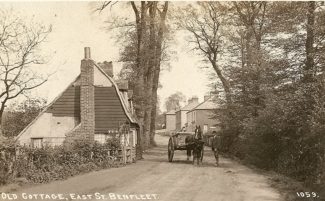 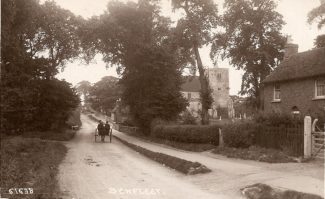 zoom
London Road (now High Road) looking towards St Mary's Church which can be seen in the background. Date unknown.

The following information was collated by former member of the Benfleet Horticultural Society, Mr J Delroyd, in 1987.  Sadly, Mr Delroyd has since passed away but his work on the history and development of the Society has been loaned to us by the current Chairman, Mr Terry Babbage.

Membership was fixed at a minimum of one shilling and was open to anyone living within a radius of 5 miles round South Benfleet (but not including Canvey Island). Initial membership was 125.

There was a committee of ten and twenty-three Vice Presidents were proposed, mostly consisting of local influential residents and leading members of the old Food Producers’ Association.

The date of the first show run by the new Horticultural Society was fixed for 28th August, 1920 and was held on Mr E Land’s meadow (The Anchor Meadow) which then existed by the side of the Anchor Inn.

Our first show was held on August 28th 1920 on the Anchor Meadow at the side of the Anchor Inn.  The horticultural exhibits were displayed in a marquee and the Show was part of the village fête organised by the Society. The practice of having the Summer show as part of a fête was continued up to the outbreak of World War 2 and then after the war up to 1952.

An 80ft marquee and staging was hired at a cost of £9 to hold the horticultural exhibits. Entry fees to exhibit was fixed at 3d for members and 6d for open classes…..

An 80ft marquee and staging was hired at a cost of £9 to hold the horticultural exhibits. Entry fees to exhibit was fixed at 3d for members and 6d for open classes, one entry in five was free as were ladies and childrens’ exhibits.

Entry to the show ground was 8d (including entertainment tax) for adults and 4d for children. An orchestra was hired to play for four hours for two guineas and the Shoeburyness Railway Silver Band hired for £5 plus free tea. A dance was organised to end the Show day.

In addition to the Horticultural Show many other attractions were laid on:  A tug of war challenge was issued by the young men of Canvey Island to those of South Benfleet, for a prize of £5 and 1,000 leaflets proclaiming the challenge and giving details of the show were printed and distributed by the Girl Guides. Sports were also organised in conjunction with the Benfleet Rovers (a club to provide sport and pastimes for the young men of South Benfleet).

A swing, coconut shies and Hoopla were provided by a Mr Bibby for a fee of £2 towards the show funds and a photographer was given permission to be on the show ground for a fee of ten shillings.

Mr Charlie Powell (a local restaurant owner and member of the Society) provided the show ground refreshments and paid two guineas to the show funds.

South Benfleet at the beginning of the 1920s

At the time of the formation of the South Benfleet Horticultural Society, South Benfleet was still a fairly complete village by St. Mary’s Church.  However, by 1920 most of the land around Benfleet had already been parcelled out for building and whilst many of the present day roads existed they were sparsely developed.

Where the War Memorial stands at the beginning of Essex Way, was known as the village square, with the Anchor Inn on one side, the Post Office and Library being in part of the Inn.

The Village Institute (a small brick and tiled roof building), the centre of village social activities—stood opposite the Anchor Inn, on one side of the main gate to the Church and F C Knightley the Newsagent and Tobacconist stood on the other side.  Both buildings were demolished in 1932 to widen the road.

From the Anchor Inn both sides of the High Street down to the station were lined with a good selection of shops, services and houses.  Benfleet Creek came under the railway bridge by the side of the woodyard (Ross Wharf) and flowed behind the Hoy Inn and the Church—here it widened out to allow barges to turn round.

At high tide the water came up the Creek as far as the High Road where a bridge spanned the narrow creek in a dip in the road.

Back to the village square:  On the left hand corner of School Lane stood a Wesleyan Chapel and halfway up the lane on the right was the Village School.

The first part of the now Essex Way was known as East Street, it then narrowed to a country lane named The Endway and ended about level with the present Norwood Drive, where a kissing gate gave access to a footpath running up to Benfleet Road near the water tower.

From School Lane the right side of The Endway was lined with old timbered cottages, some of which still exist.

On the left from the Anchor Inn were some old cottages known as the “Five Elms Cottages” after the elm trees that stood in front. From here to Norwood Drive was first the Anchor Meadow and then Town Meadow with one or two verge cottages.

The High Road (from the Anchor Inn) was then called London Road (the name was changed in 1949) and was generally rural and except for one row of houses (now shops) opposite the present day police station and another row at Hopes Green just before Brook Road, there were only isolated buildings up to Cemetery Corner. The road was, in places, tree-lined with a footpath on one side or the other and grassy banks opposite.

Hall Farm stood near where St. Mary’s Service Station now stands and then there was open ground up to Green Road, known as Hall Farm Meadow, where the village fairs and fêtes were generally held.  The Vicarage Hill Estate was not yet built and Sweet Briar Farm stood near the present Police Station.

All side roads were unmade and muddy in winter, there was no gas, electricity, mains drainage or street lighting and only one police constable for both Benfleet and Canvey.

As there was no resident doctor, Dr Grant of Hadleigh came on horseback or sometimes pony and trap and held a one hour’s surgery in the front room of Mrs Killingback’s cottage down the High Street.  The cost of a cheap return ticket on the railway to London was 2s and 3d and the fare to Southend 6d.