Motorbike Scrambling on the Downs 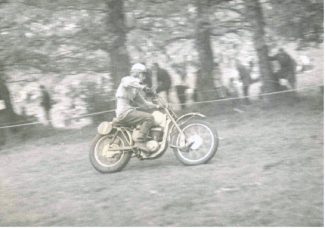 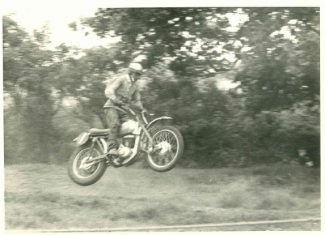 ‘I was involved in organising and getting the track ready for the two meets a year. The first was the senior international event with all the works riders, they were paid to attend. The Greeves’ riders from the Benfleet factory would come down, there were international riders, it was a big event. One year Murray Walker was doing the commentary for the television.’

‘There would be between eight – ten thousand people attend; it was the biggest event in East Anglia that weekend, perhaps in the country.  It was always on the Monday the Salvation Army would not let us work on a Sunday in those days it was taboo.’

‘Average club riders could take part, ‘I competed once it nearly killed me.’ I had a 350 Matchless, a big old beast, I did 6 or 7 laps and I could not hold the thing up, the course was very, very bumpy, I had only ever ridden on flat grass fields before.  This was hilly, you went up what we called “Monkey Hill” and then down and then up again.  The course was about three quarters of a mile to a mile long.  I think it was about 10 laps and then a final of perhaps 10 – 15 laps.’

‘It was perhaps the noise abatement society that may have been behind the closure.  The motorbikes had open exhausts and standing next to one was ear splitting, the 2 strokes were like megaphones.  I later took up sailing and you could hear the start coming out of the Medway. They started to put silences on but that took all the fun out of it.’

‘Greeves made world class bikes; they did really well for such a small factory on Manor Trading Estate. They made scramble and Trials bikes and later moved into road racing.’

The Greeves factory on Manor Trading estate still stands but no longer manafactures motor bikes, however new ‘Greeves’ motor bikes are now made in Sandon near Chelmsford.