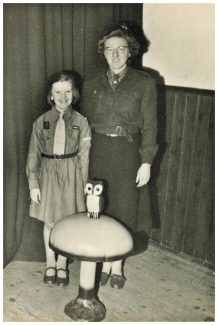 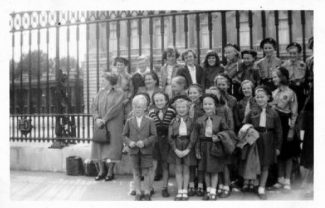 zoom
Could this be outside Buckingham Palace?
Annie Scott (nee Johnson) 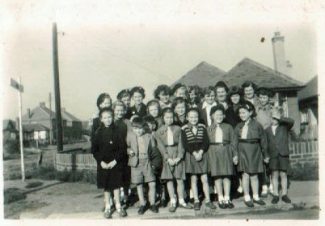 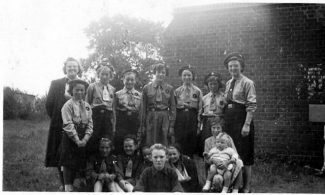 We have been asked by Annie Scott (nee Johnson) if we can help her to find out more information on the four photos on this page.

They were taken in the mid 1950s  and Annie has given us a little information that may be of help, as follows:

Can you identify this Brownie troupe?

My mother, Joan Johnson, was Brown Owl of an unknown named troupe of Brownies. I feel two photos are on a trip to Buckingham Palace although I may have that wrong. My father, Cyril Johnson was a fireman so must have been at work this day (or days), could be two separate trips. I’m not sure quite where his station was, at one stage it was Tilbury but that may have been before I was born. I know I remember him passing our home in High Road so there must have been a station nearby in Benfleet perhaps.

I have no idea who else is in the photos as there are no details at all on the backs of the photos, maybe others can fill in the gaps. As both my parents have passed away I have no further way of defining facts.

My parents moved to Kimberley Road before I was born, a lovely little two storey house called Wooloomooloo, so obviously a homesick Australian had a strong connection to the house. That is the name of a rather desirable suburb of Sydney now, after the cargo wharves were converted to homes not too long ago. Not quite the correct spelling though, never mind, what’s a missing ‘L’ after so many years. We lived there for a number of years, maybe five perhaps, until we moved to a new council home in the High Road. That wasn’t too far from the Tarpots Hotel, as I remember cheerful people on their buses stopping there on their way to or from Southend/London.

Beautiful brides and their wedding parties always caught my eye, I remember clearly poppy fields beside or very near the church which I feel was St Mary’s. I could watch the weddings but never touch a flower from the field.

If anyone can fill in some of the missing information, I would love to know.