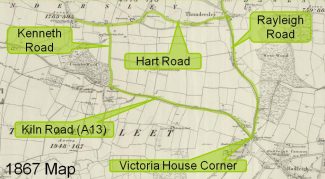 When investigating the Benfleet road system for the March 2015 Show it became clear that it was highly unlikely that Benfleet existed in any form before the Roman invasion. Sea levels were lower in those days so the area of Benfleet would have been inland and not directly connected to the sea. Canvey Island would not have been an island and so formed part of the mainland.

Another reason for Benfleet not existing at the time is due to it being heavily forested on heavy clay soil. Cutting trees down and moving them over land requires a lot of effort, and when this has been done the soil itself is hard to work and cold. The small population of the Castle Point area at the time would have used the more sandy soils on top of the ridges for cultivation.

If trees were cut down to be used elsewhere such as London then they would have been cut down near to the Thames on Canvey and floated up to where they were needed.

Excavations in Benfleet over the years have not shown any pre-Roman remains. However there is excavation evidence that Hadleigh and Thundersley existed. Excavations in Hadleigh village in the 1980s revealed a square domestic enclosure surrounded by ditches dating from late Bronze age or Early Iron age. The high ridge on which these two villages were built would have had fewer trees and the soil is sand and gravel, which is more easily cultivated.

These ancient villages would have been connected together and to Rayleigh by ancient routes which wind around on the high ground. The map below shows the roads following the tops of ridges as this is the path of least resistance against the forest and relatively level for easy travel. For more than 2,000 years these roads have followed the same routes they use today.

The only part of this road system that is in South Benfleet is Kiln Road, again suggesting that Benfleet did not exist then.