Roman Roads in Benfleet around 250 AD

Connecting Canvey and Hadleigh to the wider world 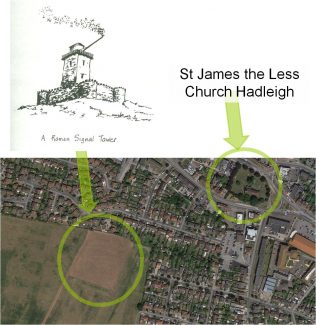 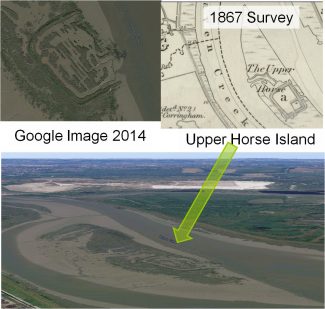 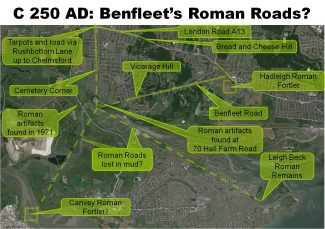 There is very little evidence of Roman or any other remains in South Benfleet village around the Roman times. What has been discovered by excavation over the years suggests at most a farm house in the area of the rail station and car park. Also we know that for nearly 2,000 years people have descended into Benfleet via the steep and difficult Vicarage Hill rather than the easier path of Essex Way. Essex Way has existed as a footpath for centuries but only became a road in 1938. These facts together suggest that Benfleet Village did not exist in Roman times.

However as you approach Hopes Green there have been a few finds of Roman remains including some at 70 Hall Farm Road. In addition in 1971 Roman artefacts were discovered where the bypass road leaves Canvey. So there are some Roman remains but how did they influence the road system? The answers depends upon two unexcavated sites which are likely to have been Roman Fortlets.

Just after WW2 a Roman Signal Fort site was discovered south of Hadleigh. All we can now see is a square of discoloured earth 100 m square. It is a double ditched enclosure and is consistent with other sites which have been dated to the late Iron Age or Romano-British period. Local historian Priestley’s history shows this picture of what it might have looked like.

There are ruins in Holehaven Creek on Upper Horse Island which have long been thought to be a Roman Fortlet. The one complete side is 100 m long, but again this has never been excavated.

The key question is why build it in the middle of a creek? This does not make much sense, which is why some Authorities have suggested that it was fish trap. If so it was very sophisticated and would require people to attend it.

However there is evidence that suggests in Roman times Canvey was above water and not an island. Evidence on Canvey show salt pans and pottery manufacture taking place and habitation at Leigh Beck. The inhabitants probably cleared all the low lying area of trees to provide fuel for the salt pans and building. This would mean the fortlet was on dry land.

Benfleet Road to Connect Them

Not all Roman roads are constructed to the highest standard we see in the main Roman roads. It is likely that the Benfleet roads were built to a good standard commensurate with the amount and type of traffic that was going to use them but were not necessarily paved with stone. Even if they had been paved the state of disrepair of Hadleigh Castle demonstrates how expensive stone was and how it was taken to build other building. In fact St Mary’s Church shows several examples of Roman tiles in its construction.  So lack of evidence of proper Roman road construction does not mean they were not Roman.

To follow from the top of Vicarage Hill along Benfleet Road today is a slightly winding but relatively straight route. The usual Roman practise was to construct as straight a road as possible between the two points. However Benfleet Road is a minor road so it is likely that the road was constructed running along the high ridge of Benfleet Road following the contours as much as possible so a to keep a level surface.

We then come to Vicarage Hill. This has been and remains a very steep and winding road. In the 19th century it required four horses to pull a carriage up it. It is the most unsuitable type of road for connecting Benfleet with Hadleigh especially as for hundreds of years you then had to pass over a brook to get to Benfleet Village. However for the Roman military this would be a minor problem compared with having a shortest practicable route between fortlets. Troops would be walking on the flat for most of the time with just the hill to deal with.

This route when extended comes to the point where Roman artefacts were found in 1971 suggesting a junction with a road then running along to the Canvey fortlet and to the Leigh Beck settlement.

When the artefacts were discovered in 1971 the historian Priestley surmised that there was a road following the modern A130 to Chelmsford. However modern excavations which took place along this route before it was built have shown no road, but have shown Roman and other remains.

Bread and Cheese Hill and the A13

The last Roman road is from the top of Bread and Cheese Hill down its steep path to join with the A13 to Tarpots. This picture from 1909 shows how it might have looked over the centuries. It is likely that the Romans constructed it and the A13 as extensions of the pre-Roman roads as a shorter route for people leaving Hadleigh wishing to go to Chelmsford or Pitsea without having to go to the Canvey junction.

This article is based on looking at maps and such old records as exist. However there is no excavation evidence that any of these roads are Roman. But looking at maps over the last three centuries shows how persistent road patterns are. Also major Roman roads still form part of our modern road network. Therefore it suggests that these Benfleet and Canvey roads are Roman until evidence comes along to suggest they are not.