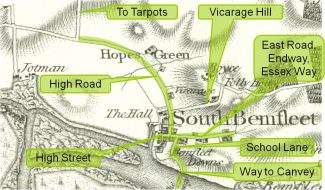 In 350 AD and 550 AD there was an increase in sea levels in the North Sea of about 2 feet, which would have covered Canvey and created the creeks which make it an island. Canvey would have changed especially as the area had most likely been deforested for fuel and building.

This flooding also affected the land in Benfleet up to Hopes Green. We think this is how the Roman roads on Canvey were destroyed by over a 1,000 years of tides, twice a day, coming over what is now marshland.

There is environmental evidence that suggests that woodland regenerated after the Romans left making it likely that the local population of Castle Point declined. Evidence of much woodland is shown in the use of ~leigh (Rayleigh, Hadleigh, Leigh-on-Sea) or ~ley (Thundersley, Hockley) in place names which are derived from the anglo-saxon word leah which is believed to mean a settlement in heavily wooded country. They are rarely used in place named before 750 AD.

The Saxons colonised this area in 500 AD to 700 AD and are likely to be the first people to have built a settlement. They named it Benfleet, which is an Anglo-Saxon word meaning a tree and a strip of water. They are likely to have established the settlement on the high land which is the old village. The roads they created in this settlement are what is now the High Street, School Lane and the lower part of Essex Way.

The new settlers most likely made use of the existing Roman roads but as the lower parts were below water they created the road round the edge of the high water mark which is now the High Road.

They also had a route to Canvey Island which led to the causeway over the Downs from what is now School Lane.